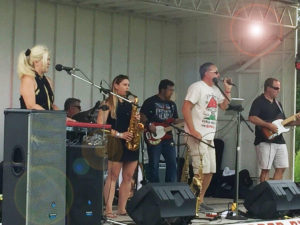 Steve Berry, the voice of Des Moines, is heard virtually everywhere. He is on the radio touting Prairie Meadows, at the Des Moines Playhouse portraying Jesus or performing a Vegas comedy shtick act of Joey Libido. So his latest foray into singing and performing was no surprise when he formed the band, Stark Raving Madge three years ago.

âI had a band years ago and sat in with other bands, really good bands, and thought why not start my own?â he says.

One evening with his longtime musician friends, Dave and Ben, they discussed band specifics and named the band Stark Raving Madge, based on the Palmolive dish soap lady commercials.

âWe had one too many scotches one night and came up with the name,â he admits. âSheâs iconic from the 60s and 70s and thatâs the genre of music we agreed on.â

They discovered that this market had a need in that niche of music.

âI think people like that genre,â he says. âYou get everything from rock to cheesy pop. We play disco, even though itâs had a bad rap. Weâll play anything from Bee Gees to the Stones. Thereâs an amazing breadth of material from that area. You had Frank Sinatra and the Beatles both in the top 20.â

âItâs a matter of throwing it on the wall and seeing if it sticks,â he says. âSome songs donât make it. If you donât like one, stick around. Youâll like the next one.â

The band plays limited club gigs, such as the Iowa State Fair, Pal Joeyâs and the Gas Lamp. They prefer an earlier start time, with the happy hour time slot ideal.

âWe used to play til two in the morning, not a big deal when youâre younger,â he says. âWe like gigs where we can relax and get home in time for the 10 oâclock news. We donât play a lot of gigs. Itâs a like dessert â you tend to enjoy it more.â

âWhen you have a great group of musicians, it sure beats going out and singing karaoke,â he says before adding, âIâve been gifted with a voice. I love to entertain. I hope people enjoy listening to us.â ♦