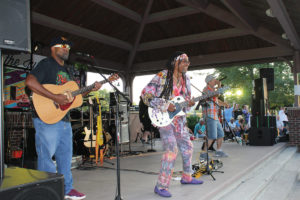 Richard Lloyd, clad in a purple tie-dye outfit, picks up his yellow Prince-inspired guitar and climbed off the stage at the outdoor Clive Festival. His facial expression mimics the highs and twang of his Jimi Hendrix guitar solo, as if heâs an extension of his guitar. He flips his dreadlocks on the guitar strings while mesmerized fans take cellphone videos.
Lloyd, also known as Dick Danger, founded the Des Moines-based Dick Danger Band in 2014. The band name comes from his childhood. After reading Dick Tracy detective books, he dubbed himself âDick Danger.â

As a youth, Lloyd sang in a church choir but didnât pick up a guitar until he was 22. As a self-taught guitarist, he was inspired by Jimi Hendrix, Prince and other funk-R&B musicians. Heâs performed in several bands, including Comfort Zone and a 10-year stint with Skooter Krunch, when the band wore matching clothing.

Today, he dresses in unique, custom-made clothing and explains his outfits.

âI just want to look different. Everybody remembers the visual aspect of a band,â he says. âItâs like a wedding cake. You might remember how good it looks, but it might not taste good. Weâre hoping weâre both.â

The band plays R&B, soul and funk from 1970s dance music to todayâs hits, including Bruno Mars and Prince.

âDes Moines is a classic rock town. We want to have our own genre,â he says. âSometimes it shocks people when we play something different, such as Coldplay. We also feature two rappers during our concerts.â

At a recent concert, lead singer ArâJye Collier grabbed a mic and flirted with the crowd, encouraging the ladies to sing along with the âHot in Herreâ song, âItâs so hot, I wanna take my clothes off.â

Needo, the youngest band member at age 28, is also blind. Lloyd says itâs challenging at times, but says, âHe has perfect pitch. Weâre trying to get him to sing more.â

The band performs dance tunes and helps their fans forget their worries.

âWe like seeing people enjoying themselves. Any entertainer sees the crowd and responds, feeding off the energy of the crowd,â says Lloyd. âWe have the greatest fans, and we would be nothing without our following.â ♦