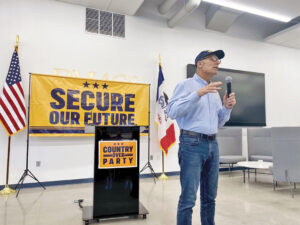 Admiral Mike Franken, the most senior retired military officer to seek office in Iowa, has barnstormed the state for months, hitting his native rural western Iowa on repeat with a message and Navy bearing that will cleave enough Republican votes in this decidedly red region of the Hawkeye State to retire the monarchical Charles Grassley.

It will be fitting. As King Charles ascends the throne in England, Senator-for-life (well, almost) Charles Grassley will depart the trappings of the first-floor Hart Senate Office Building on Capitol Hill heâs inhabited since I received my first press pass in the days when you could still smoke cigarettes outside of his office.

Franken is perhaps the only Democrat at this moment in Iowa who could defeat the long-tenured Grassley, an Iowa Republican. Franken is not a pronoun progressive, but rather a relatable Democrat whom independents and many Republicans view as a safe vessel for a discontented or exhausted vote with Grassley for his dynastic run.

The way a select small cast, but a vocal one, of the Democratic Party seem to be angry at Franken for being a rural white guy has stirred up the headwinds of accidental triangulation that will allow Franken to hold his base, save for a few bitter Abby Finkenauer dead-enders, while attracting western Iowans out of reach to most Democrats.

Franken is a digestible Democrat in my part of the state â again to the extent anyone in the party can be in the era of rabid tribalism. His years of military service still cut through, and he talks and interacts like a real person, not a cocooned politician who is chronically self-assured (Grassley) or frightened to offend anyone who doesnât look like them (many modern Democrats).

âI am less attached to political labels and the like,â Franken told me in the student center of the Des Moines Area Community College Carroll campus a few days ago. âIâm much more common-sensical. I donât know if I am easily typecast in any location.â

A retired admiral who worked his way through school in a northwest Iowa slaughterhouse is not a man who is going to lecture Iowans on how they talk, which is the sort of condescension that drives voters away from policies that will benefit them on health care (Franken wants to see all Americans treated like members of the military) and rural development (Iowaâs small towns are losing to the Des Moines suburbs) and foreign policy (Franken brings a seriousness of resume at this most serious of times when the potential for nuclear war looms larger than any point since the 1980s).

The Des Moines Registerâs latest Iowa Poll puts numbers behind what Iowans instinctively know â that no mortal deserves to continuously hold elective office for 63 years. Surely, that is enough time to exhaust all of oneâs policy ideas â the good, the bad and the genius and the crazy. Two-thirds of Iowans in the poll say Grassleyâs age, 89, is a concern as he seeks an eighth term in the Senate.

The only way Grassleyâs grip on power could be more âGame Of Thronesâ would be if he inked a contract to have himself cryogenically frozen just before death for a real and political resurrection in the year 2059, a century after he started serving in the Iowa Legislature in 1959, during the Eisenhower Administration, a fact I check every time I type it, as it is a seemingly unfathomable stretch, with so much power in the hands of one man for so long.

âI am most interested in if it is my time to represent the State of Iowa or is Iowa going to proceed upon the course that we are presently on,â Franken said. âWhatâs the consensus, regardless of your political affiliation, of where that course is?â

The Iowa Poll shows Franken within 3 percentage points with Grassley at 46% and Franken 43%.

âIt says to me that Franken is running a competent campaign and has a shot to defeat the seemingly invincible Chuck Grassley â previously perceived to be invincible,â said pollster J. Ann Selzer, president of Selzer & Co., in The Des Moines Register story on the Iowa Poll.

The silent majority in Iowa still remembers who they are even amid the tribal fog, and they appear to have gathered in this race.

After the poll broke, the Franken campaign had its best four-day fundraising run to that point.

A moment that sticks out to me is watching a Navy veteran cautiously approach Franken in Clear Lake this past August. The two men huddled, talked of shared service, exchanged some jokes. The elderly veteran talking to Franken beamed. As they parted, Franken, a squared-away Navy man several inches taller than his fellow vet, lowered his head down, put his arm on the manâs shoulder, leaned in, and said with a blend of force of voice and kind intimacy that only military men can carry off, âItâs a damned pleasure to meet you.â

The veteran walked away with tears in his eyes, feeling good about his service, his country â and, yes, the Senate candidacy of Mike Franken, the retired admiralâs âCountry Over Partyâ slogan, which ainât bragginâ if you can back it up.

Franken is within 3 points and closing of doing just that. ♦