âIf not me, who?â former admiral asks in Senate campaign 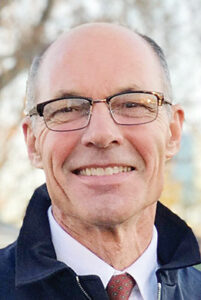 As a western Iowan who worked in two packing plants, grew up the son of a teacher and machinist and served decades in the Navy, Ret. Adm. Mike Franken sees himself as the sort of independent-minded â and branded â  Democrat who can cut through GOP-leaning tribalism in a statewide race.

Franken, 64, a product of Sioux Center who now lives in Sioux City after decades of globetrotting in the military, is the latest Democratic candidate to announce for the U.S. Senate seat the long-time Republican Sen. Charles Grassley is defending in 2022.

âIf not me, who? So I offer myself to the Iowa voter,â Franken said in a recent phone interview.

The challenge for Democrats in Iowa is enormous, acknowledged Franken, who says a path to victory largely runs through independent voters and a limited number of Republican crossovers in addition to maintaining the Democratic base.

Most Republicans in the era of Trump arenât reachable to any candidate with a âDâ after their names on ballots, he said. Franken said 80% of the GOP has locked itself in with Trump.

Independents who have voted for Grassley will be likely to see Franken as a âreasonable substituteâ for the sitting senator, albeit one with a fresh perspective, Franken said.

âLike many Americans, I feel the political dysfunction is rather stark, and I think we need people who are not so entrenched in the past and sided with where they are amongst the party politics that they canât do whatâs best for their citizenry,â Franken said.

Franken said he doesnât have a 60-year legacy of votes as Grassley does. Grassley has served in elective office in Iowa since 1959, having been elected to the Iowa House during the Eisenhower administration.

âHeâs rather strayed from his principles,â Franken said. âI pride myself being a person of principle. I think ultimately thatâs a central Iowa value. I think that would be the thing that sets us apart the most.â

Franken, who commanded 24 ships during his time in the Navy and lists policy and Capitol Hill experience on his resume, said he can confront Republicans with a âhigh level of morality and sensibility.â

âI think whatâs not spoken enough is leadership,â Franken said. âYouâve got to have a commanding influence on individuals.â

âItâs humming along now,â he said.

Franken said he can help bridge the rural and urban divide in Iowa. He also wants to elevate actions to eliminate malnourishment, improve child care and boost education.

âIâm a product of public education,â Franken said. âI donât understand why teachers donât have that same level of respect in society that they had when I grew up. You define your value by what you pay people. Their pay has remained stagnant.â

Then there is his agriculture background.

Franken worked for packing plants in Sioux City and Sioux Center in his school years. He was a 19-year-old foreman at the Supreme hog-kill plant near his hometown.

âWhen I was in college, I didnât go to South Padre Island for holiday; I went to the chitlins table,â Franken said. ♦