Why they support Trump

Thousands gather at Iowa State Fairgrounds on Oct. 9 to advocate for the former president. 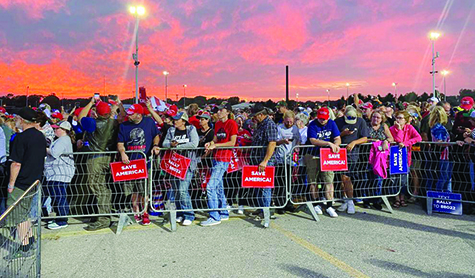 Supporters of former President Trump who showed up in the thousands at the Iowa State Fairgrounds in Des Moines expressed anxieties with the economy â especially gas prices â along with major distrust of President Biden and the media.

In interviews before Trump spoke for 90 minutes Oct. 9 at the Des Moines rally, his steadfast advocates, many of whom waited four or five hours to hear Trump speak, showed no cracks in their loyalty to the potential 2024 presidential candidate.

Tony Cansler, who works in maintenance at the Riverside Casino & Golf Resort in eastern Iowa, supported Trump in the last two presidential elections. This was his third rally.

âThe economy is worse; the border is worse,â Cansler said. âEverything is in terrible shape.â

The Biden Administration has been too generous during the pandemic, making people lazy, he said.

âIt seems like prices of everything were down during his presidency,â King said. âUnder Biden, in 10 months weâve seen everything go up.â 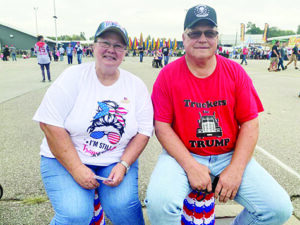 Dean and Crystal Beckler of Crawfordsville sport pro-Trump T-shirts at a rally in Des Moines, the first the former president has held in Iowa since losing the election in 2020. Photo by Douglas Burns

Trump is largely misunderstood by his detractors, King said.

âYou know, the whole hurt-your-feelings thing, his rhetoric, his stance on the way he talks,â King said. âA lot of people donât like that. Itâs his style. Heâs not a politician. His manners definitely could be better for sure.â

Being banned from Twitter has actually helped Trump, said King, an Emmetsburg native who works for a trucking company in Sioux City.

âIn the four years he was in, I never made so much money,â Dean Beckler said.

He misses Trump and hopes the former president runs in 2024.

Beckler voted for former President Obama before casting a ballot for Trump.

âThe biggest problem is for years when Trump was in office people kept saying he was a dictator,â Beckler said. âYou want to see a dictator? Go back to school and learn what a dictator was, because Bidenâs a dictator. Heâs telling you that you have to go get the shot (COVID vaccine). If you donât get the shot, you donât work.â

Crystal Beckler said the misunderstanding many Americans have about Trump comes from the media.

What are the worst lies from the media in her view?

âThat heâs misogynistic and heâs racist and heâs a dictator,â Crystal Becker said. âAll of it is lies. Turn off the TV, go do your own research and find out what heâs all about.â

Ace Downs, 28, who wore a profane T-shirt critical of Biden and Vice President Kamala Harris and made the drive of nearly four hours to Des Moines from Gardner, Kansas, said he wanted to be among thousands of like-minded people gathered to urge Trump to run in 2024.

âOur country really needs him right now in more than one way to be honest,â Downs said. âWe need security at the border. We need morale up in the country. We need somebody that is able to have our backs. I donât feel like that with this (Biden) administration.â

Downs said he prays that the United States is not on the verge of a second civil war in an era of polarized and fractured politics.

âIâm a Christian man, and I believe that everybody should love everybody,â Downs said. âJust because we are divided on what we think, that shouldnât dictate how you live your life.â

His wife, Tayler Downs, 25, wore a pink âWomen for Trumpâ pullover sweatshirt. She wants him to pursue a second term. And she has a decidedly different take on the prospects for civil war than her husband.

âI donât like all of the diversity, I think is the word Iâm thinking of, between people of mixed races now that have went on this last year,â she said. âItâs bothersome to me. I feel like the United States is going back to war, racial war, and stuff like that. It sucks.â

Whose fault is that?

âQuite a few people,â she said. âBut it didnât seem to happen while Trump was in office.â ♦