Centerville Iowegian goes down to coronavirus in 2020 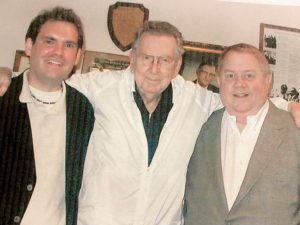 Carroll Times Herald and Jefferson Herald co-owner Douglas Burns (left) is pictured 20 years ago in Centerville with Bob Beck (center), the late publisher of that cityâs newspaper, The Iowegian, and the late James B. Wilson, the former publisher of the Carroll Daily Times Herald.

One of my great misfortunes is that I never got to know my grandfather, the late publisher of the Carroll Times Herald, James W. Wilson.

Nothing can make up for the conversations that never occurred.

But, in one of lifeâs rich paybacks, I did have the opportunity to learn about my grandfather through a spectacularly kind and wise surrogate.

In the late 1980s, while I was working for The Palm Beach Post in southern Florida in my early 20s, I really got to know Bob Beck, a longtime family friend and professional confidant of both my grandfather and uncle, James B. Wilson, the late publisher of our family paper. I sit at a desk in Carroll in the same office my grandfather and uncle used, underneath photos of both of them.

Mr. Beck, the former publisher of Centervilleâs Daily Iowegian, a towering figure in journalism and Republican politics for decades, spent a lot of time with me in Florida, taking me to dinners, having me over for drinks with his wife, Charlotte, and their friends.

Our family, like so many others in Iowa journalism, or in the state as a whole for that matter, mourned the passing of Mr. Beck in 2004 at age 88.

Now, we grieve the loss of the Centerville newspaper, which is closing operations and merging coverage with the Ottumwa Courier.

âOur mission is to serve Centerville and the surrounding communities with news, features and sports reports that you both want and need,â Iowegian publisher Becky Maxwell said. âThat mission has faced stiff economic headwinds in recent years. The Daily Iowegian has fewer subscribers, and advertising revenue has steadily declined. Now the coronavirus crisis has dealt a gut punch. It has impacted our operation like no other issue.â

Which all brings me back to my mentor and one of Maxwellâs predecessors, Bob Beck.

Beck was easygoing with a sort of honest, cagey amiability. And he was as accomplished as he was humble. Unlike so many older people, or people in general, Beck, a journalist to his final day, preferred to listen, rather than talk.

Where I was involved, heâd ask questions, offer subtle bits of advice on stories, things that would hit me later when I read the published articles and saw Mr. Beckâs hints manifest in my work.

But to say that Bob Beck was a brilliant listener isnât to imply that he had nothing to say himself.

No, Mr. Beck was an extraordinarily interesting man who just found other people more compelling than himself. You could see it in his columns, and itâs no doubt what made Mr. Beck a formidable candidate for governor in the 1960s. Beck lost a GOP primary to Robert Ray, who went on to serve as Iowaâs governor for 14 years.

âI lost to a good man,â Beck said of Ray in an interview with Iowa journalist Chuck Offenburger.

Within hours of hearing the news about the Iowegian, Rayâs former press secretary and chief of staff and my good friend, David Oman, and I both had thoughts that went to the same place: Bob Beck.

About 20 years ago, Offenburger and I had ringside seats for a rare and fascinating journalistic forum: the now late George âLeftyâ Mills, the legendary Des Moines Register reporter, Beck and my uncle sat around a table at Noahâs restaurant in Des Moines and talked for nearly two hours about newspapers, politics and Iowa.

Offenburger recorded the notes, and I took the photos. Neither Chuck nor I talked much.

âMills and Beck both figure they did their newspapering in the industryâs glory years,â Offenburger wrote in a fantastic piece that ran in February of 2002.

Beck, according to Offenburgerâs story, grew up in Centerville where his father, Jesse M. Beck, was at the Iowegian from 1903 until 1965.

Under Jesse Beck, The Iowegian waged a fierce â and ultimately successful â fight against the Ku Klux Klan in southern Iowa, where the KKK had gained a foothold that modern Iowans would find astonishing. The paper editorialized against the KKK on its front page and faced reprisals from Klan supporters, Mills told us.

The accounts of this period, for those who want to learn more, are laid out in great detail in Enfys McMurryâs book, âCenterville: A Mid-American Saga.â I have a copy of it in my office here in Carroll and often refer to it for inspiration when I get down on things.

For his part, Bob Beck joined the paper after he graduated from Iowa Wesleyan College and served as its publisher from 1945 to 1983.

In the years of our friendship, Mr. Beck gave me firsthand accounts of the generations of community journalists who ran so many of the colorful newspapers now in the grips of corporate management or collapse.

I would have preferred to learn about my grandfather through autobiographical means, but Mr. Beckâs biographical sketches of the days he spent with James W. Wilson were remarkably meaningful for me, and continue to be so.

Clearly, Bob Beck taught many of us a lot about Iowa history and journalism, but ever the eager student, he also jumped headfirst into the computer age, learning and using both the Internet and digital photography with great skill in his later years.

Mr. Beck took on the roles of measured statesman and crusading editorial writer to build support for decades of progress.

Much of the community involvement of the Carroll Times Herald â through my uncle and my mother, publisher Ann Wilson â has been inspired in large part by Bob Beck, a man who always reminded them of the principles held by their own father.

Beck, who wrote his highly respected âCenterville Streetsâ column well into his 80s, will never pen another word for a newspaper, at least not an earthly one.

But his influence will continue to manifest regularly. ♦