Why Steve King should stay in Congress

Two more years of embarrassment will be an object lesson to King voters who looked the other way for years at his racist words and outrageous observations.

(Editorâs note: The following column also published in the Carroll and Jefferson newspapers, which are both owned by Doug Burnsâ family and serve readers in Congressman Steve Kingâs district.) 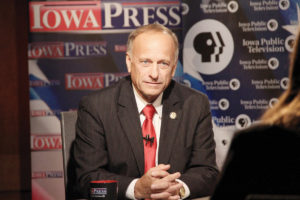 The Steve King representing Iowa today is the same man voters from our readership supported overwhelmingly in nine general elections. His body ages, but his ideas donât.

Yes, we fully expect to endorse one of Kingâs Republican challengers in the June 2020 Republican primary in Iowaâs 4th District, a sweep of 39 counties.

But we are not joining our colleagues at other Iowa newspapers â from The Sioux City Journal to The Fort Dodge Messenger to The Des Moines Register, to name a few â in calling on Congressman King to resign.

We think the congressman should stay in office as a diminished representative, one with no committee assignments, a legislator with two arms and a leg tied behind his back, as an object lesson to voters in Iowaâs 4th District who looked the other way for years at his racist words and outrageous observations.

The people of this district deserve two more years of Kingâs disastrous time-management as a moon-howling fabulist more interested in spinning fantastical ideological yarns than engaging in the hard slog of legislating on rural development or a raft of other issues. Add to this, for the 16 months until the primary, Kingâs use of our congressional platform, the lift of our collective voices (which were heard fair and square at the ballot box), to serve as his own litigator in the court of public opinion.

Should King choose to stay in office, and his defiant fund-raising email Wednesday suggests heâll do just that, we would, in an appeal to common sense and frugality, call on the congressman to reduce his staff in Washington, D.C., as he has no committee work for them to do.

Elections have consequences. King is the consequence for the complicity of far too many Iowans. He is the congressman they elected â and the one they deserve. Voters here canât play the role of a newlywed bride surprised when her husband, inhibitions loosened with the sweet coconut of piÃ±a coladas on the honeymoon cruise, slurs the truth of his closeted infidelities below deck the night before.

Western and central Iowans went into the November election with eyes wide open.

Since 2002, when King emerged from a competitive primary (in which former Iowa House Speaker Brent Siegrist of Council Bluffs had peerless credentials) and cruised through the general election, we have interviewed King well more than 100 times â at least.

His comments have been head-spinning. Itâs like a bad stand-up act suddenly had unlimited congressional stationary and other official trappings of power.

King once sent out a news release of himself sitting in one of Saddam Husseinâs thrones.

He told us in Jefferson that he doesnât think heâll see any gay people in heaven.

In July 2006, King went to the House floor to display the model of a wall the Kiron Republican said he personally designed for the U.S. border with Mexico. He delighted in demonstrating â as if at some Nationalist Youth Science Fair â how the electrified wire could really hurt, but just not kill, the brown people seeking to breach it.

âWe need to do a few other things on top of that wall, and one of them being to put a little bit of wire on top here to provide a disincentive for people to climb over the top or put a ladder there.â King said in explaining his design. âWe could also electrify this wire with the kind of current that would not kill somebody, but it would be a discouragement for them to be fooling around with it. We do that with livestock all the time.â

He defended torture at the Abu Ghraib as mere âhazing.â And he compared immigrants to stray cats.

Then there’s his anatomical takedown of Latinos â arguably his most infamous quote.

In 2013, King, a fierce opponent of a path to citizenship for immigrants in the United States without proper papers, said he didnât agree with the suggestion that many youths who arenât legal citizens are also high-achieving.

âFor every one whoâs a valedictorian, thereâs another 100 out there that weigh 130 pounds and theyâve got calves the size of cantaloupes because theyâre hauling 75 pounds of marijuana across the desert,â King said.

Sioux City Diocese Bishop R. Walker Nickless â the leader of the Catholic Church, Kingâs religion, in much of Kingâs district â said at the time that Kingâs comments on immigrants are âdisappointingâ and detract from the âdignityâ of human beings.

âI am disappointed by Representative Kingâs remarks, which speak of migrants in a way that undermines their human dignity and the respect owed them as children of God,â Nickless said.

Early in his congressional career, King would regularly stop in Carroll for interviews with us. He lives a little more than a half-hour drive from Carroll in rural Kiron. We gave him generous amounts of ink to air his views, for coverage of his events here.

Because of his concerns about the impact of war protests in America, King went to get a firsthand view of the anti-war demonstrations and speeches in Washington, D.C., just after the war in Iraq started in 2003.

The congressman spent about 90 minutes among war protesters around the Washington Monument and other places in the nationâs capital. One episode stood out to King, and he described it to us during an interview.

For nearly two decades, we have reported how King sees the world â The Book Of King, if you will.

So have other newspapers and media outlets in this district, and around the world. Yet King didnât just win here in Iowaâs 4th Congressional District. He racked up landslide numbers â 73 percent in Sioux County, 61 percent in Shelby County and 59 percent in Sac County â in 2018, and just weeks after ugly reports of Kingâs very public consorting with an Austrian political party associated with neo-Nazis and his endorsement of a white nationalist, Faith Goldy, for Toronto mayor.

We drove through Kiron two weeks ago, and the hamlet is struggling, but King has time to worry about who is making zoning decisions advantageous to white people in Canadian cities?

Would it be better in the short term if King were flushed from public life? Yes. And a resignation would bring that solution.

But like the teenager caught doing something foolish, the best remedy, the true learning experience for the Steve King voter, comes through a healthy dose of embarrassment.

Thatâs just what voters here ordered with Steve King. Now itâs time to take the medicine. The prescription expires in January of 2021, the next inauguration day in our nationâs capital. ♦