Yes, friendship matters to Iowans, and itâs time for Ernst to go Harry Truman on Trump 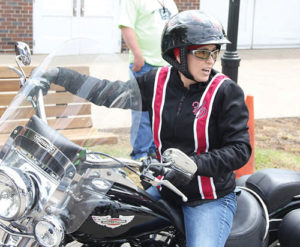 U.S. Sen. Joni Ernst, R-Iowa, pictured here during her 2016 Roast and Ride in Des Moines, has a stronger and more durable brand in Iowa than President Trump. Ernst, a tough, loyal rural Iowan, should stand by her friend, U.S. Sen. Kirsten Gillibrand, a New York Democrat, who was sexually harassed in a President Donald Trump tweet.

Senator Joni Ernst, who has built a formidable friendship with New York Democrat Kirsten Gillibrand, no doubt dodged a question as a politician she desperately wanted (or needed) to answer as a friend.

Ernst, an Iowa Republican, was asked to comment by Huffington Post politics reporter Igor Bobic about President Donald Trumpâs sexist smear of a tweet about Gillibrand.

âIâm sorry I donât follow his Twitter,â Ernst said, according to Bobic â who offered to show her the tweet.

âNo, I would rather not. Thank you,â Ernst said. (How does a senator not follow Trump on Twitter? Knowing what he tweets day-to-day is more of a window into the presidentâs mind and motivations than the scripted State Of The Union speech coming up in weeks. But thatâs another matter.)

Hereâs what Trump said in the tweet: âLightweight Senator Kirsten Gillibrand, a total flunky for Chuck Schumer and someone who would come to my office âbeggingâ for campaign contributions not so long ago (and would do anything for them), is now in the ring fighting against Trump. Very disloyal to Bill & Crooked-USEDâ

The clear Trump suggestion here is that Gillibrand would perform sexual favors on Trump for political ends. In essence, Trump is sexually harassing Gillibrand in the broad daylight of social media, in front of a nation now roiling from a reckoning over outrageous male entitlement when it comes to womenâs bodies.

Ernst, who has the skills and character to be president of the United States herself, should recall her Red Oak roots and remember that rural Iowans appreciate leaders who go with personal loyalty over partisan play calls.

Senator, stand by your friend. Call out Trump for what you would surely want to see a military man disciplined for doing to a junior female officer. Had a male general sent that Trump âdo anythingâ tweet about a female lieutenant, should the U.S. Army look the other way?

Ernst, the first female military combat veteran to serve in the U.S. Senate, has talked with this newspaper, beginning early in her Senate career, about a good working relationship across the aisle with Gillibrand, a U.S. senator from the Empire State whose potential as a Democratic candidate for the White House improves daily, both in spite and because of Trumpâs cheap-suit sexism.

âI love working with her,â Ernst told this newspaper about Gillibrand, talking about their joint efforts on violence against women in the military and funding for World Trade Center-9/11 emergency personnel.

From promoting women-owned businesses and female entrepreneurs, to battling domestic abuse and sexual assault in the military, to seeking better data from the FBI on stalking, Ernst and Gillibrand are on the case, an estimable bipartisan team.

There are reportedly some strong bonds of personal friendship here, which is something in this divided America we all should cheer. One could only imagine the power of a fusion presidential ticket if Ernst and Gillibrand broke partisan shackles and ran on an all-female-consensus, results-first platform.

During his presidency, Harry Truman stood by Secretary of State Dean Acheson and Defense Secretary George Marshall as they came under attack in the Red Scare. In one of the more poignant scenes in the 1995 movie âTruman,â award-winning actor Gary Sinise, playing the president from Missouri, backs the decent men who have been loyal to him, damn the torpedoes.

In my career, I have been privileged to interview dozens of World War II veterans. Many of them, rock-ribbed Republicans, told me they voted for Truman, a Democrat, out of pure personal respect and admiration because he ended the war.

Hereâs the reality today in the Hawkeye State: Ernstâs brand in Iowa is far stronger, more durable and real than Trumpâs. Itâs built on substance and connection and affection.

Steve Bannon canât come into Iowa and challenge Ernst in a primary in 2020 with someone like Bob Vander Plaats.
In fact, in the presidential election year, with independents turning on Trump, Ernst could earn widespread respect by denouncing the vile tactics of Trump where Gillibrand and other women are concerned â at a time when the political calculus is not so easy, so obvious, for a Republican senator (who wants to protect the Iowa commodity-boosting Renewable Fuel Standard from any gutting at the hands of the ever-fickle and instinctively retaliatory Trump).

The iconic line Ernst should deliver at a news conference would be straightforward â and career defining.
âMr. President, have you no sense of shame? You donât treat women like this, Republican or Democrat, and you sure donât treat my friend, Senator Gillibrand, with disrespect. Iâm going to stand behind Senator Gillibrand every step of her career because sheâs a first-rate public servant, someone I admire, even if I vote against her 90 percent of the time. Anyone who has spent time in an Iowa diner over morning coffee knows our best friends are the ones with whom we often disagree, winning some arguments, probably losing more â but never losing respect and the human connection that is so much deeper, essential to life than the fleeting topic of the moment.â

Hereâs hoping the Ghost of Harry Truman appears in Ernstâs house late one wintery evening with this advice â something Ernst, in her every waking minute, knows is the right thing to do.

If we get to the point where we donât put our friendsâ interests â when they are under siege and need us most â above our own ambitions and convenience, then how in the name of Denisonâs Donna Reed can we call life in our state anything resembling wonderful? ♦