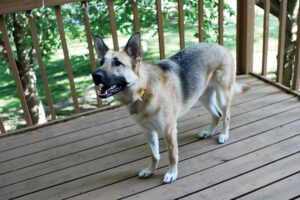 The Flash is a sci-fi superhero who is a courageous character in comic book life.

Flash is also a German shepherd owned by Eleanor Vestal â and he is her own personal superhero that makes her life better.

Vestal obtained Flash as a puppy three years ago. She had just moved into her own apartment and was feeling lonely and depressed.

âI got him for mental health. Iâd struggled with anxiety and depression, and heâs really helped,â she reflected.

Prior to getting Flash, she researched dog breeds. Sheâd loved German shepherds, although she never had any pets as a child. She said she likes that they are reliable. 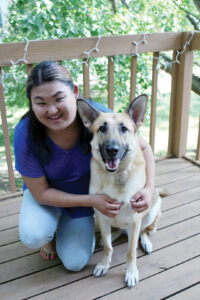 Vestal knows that some German shepherd breeds are frequently trained as military and police dogs. She dispelled a misconception that the breed is always on guard, ready to attack. She took him for obedience training to ensure he was trained as a friendly pet.

While taking Flash on walks, others who meet her along the way often avoid her and Flash.

âPeople get intimidated from him. He has a deep bark. Some tend to stay away from him.â

Yet, thatâs one reason why Vestal said she likes him.

âI donât feel scared to walk at night with him.â

With Flash being a bigger dog breed, he also requires lots of exercise and play time. Sitting around home or kenneled isnât an option â although Flash is not a âfetchâ dog.

âIâll throw a ball, and heâll tug at it, saying itâs his. He likes tug-of-war the best,â she said.

As a double-coated dog with thick fur, he sheds often. Because of his fur, he enjoys cold weather.

âHeâs happy to be out in the cold or snow,â she said.

Flash has been a savior for Vestalâs mental health.

âI felt a really big change in my mental health after I got him. I still have some bad days, but not as bad as in the past,â she reflected. âBefore I wasnât sure of ways to cope. He opened my eyes to coping in positive ways.â

Vestal has been outside, enjoying nature, because she knows itâs important for Flash to get outside. Other bonuses: the fresh air and seeing others makes her feel less lonely.

âHeâs my companion â my buddy. Heâs someone who is always there for me. Heâs always happy to see me when I get home from work,â she said.

For other people struggling with anxiety and loneliness, Vestal suggested a pet.

âMy friends and family arenât always around,â she said. âBut a pet is always there for you unconditionally.â ♦