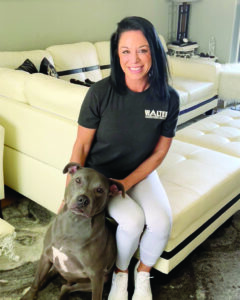 Gracie was rescued from a kill shelter in Oklahoma as a puppy.

The stories of how Shelease and Jesse Rittenhouse obtained their three dogs are similar. One element remains constant â their love of saving animals.

Maddie, an English bulldog, was 8 years old when they adopted her from AHeinz57 Pet Rescue. At age 12, Maddie is now a big âcouch potato.â

âMaddie is a homebody. She walks one block and lays down,â Shelease said with a laugh.

Their other dogs, Max and Gracie, are much more energic than their older sibling. The Rittenhouses rescued both of the blue-nosed pit bulls.

It started with Gracie and Walter. The puppies, along with four others, were in a kill shelter in Oklahoma. Rescue Rehab Rehome arranged for a halfway meeting point in Kansas for the Rittenhouses to pick up the dogs. They drove five hours in a rainstorm.

The couple adopted both Gracie and Walter, a âfoster fail.â Sadly, Walter died of cancer at just 18 months old. 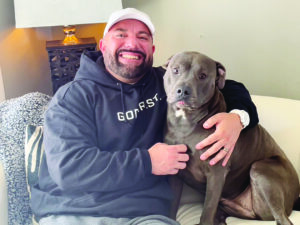 Max was surrendered in Grinnell to Rescue Rehab Rehome before coming to the Rittenhouses.

âWe could tell Shelease and Gracie needed a companion,â Jesse said. âWe reached out to Rescue Rehab Rehome, and, within three days, they found us a dog.â

Max had been surrendered in Grinnell after experiencing a horrible home situation where he was kenneled 18 hours a day for the first year and a half of his life.

âMax was petrified of girls, as a girl used to beat him,â Shelease said. âNow he doesnât leave my side.â

Since Gracie and Max are pit bulls, strangers are hesitant to approach the dogs.

âWe took the pitties to an outdoor Italian festival. Some people see them, and itâs hit or miss; they cross the street to avoid them,â Jesse said.

While some pit bulls are bred to fight, Jesse said not all owners raise their dog that way. 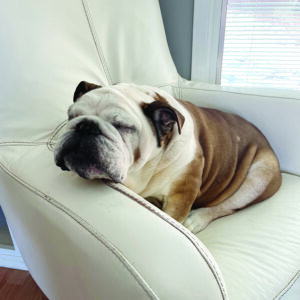 Shelease and Jesse Rittenhouse adopted Maddie when she was 8 years old.

âOur biggest thing is being a voice for them. They are the greatest dog. Gracie doesnât have a mean bone in her body. Sheâs afraid of her own shadow,â Shelease said.

Jesse takes the dogs to his job, Walter Roofing and Solar. They named the business after their dog, Walter, passed away.

âMax loves to jump out of the truck. Employees are either very afraid or really love them,â Jesse said.

When they parented pups, the couple had to dog-proof everything. Admittedly, they went through a couple of couches and several random shoes.

Jesse suggested researching the breed before adopting a pit bull.

âThey are a high-energy dog,â he said. âMake sure you can commit the time it takes to raise the animal.â

The couple says their dogs are like family. They all hop into bed together at night. The Rittenhouses rest easy knowing theyâve saved at least three dogsâ lives.

âA rescue dogâs love and affection is second to none,â Shelease said. âI like them more than people. Theyâre loyal and they live for us. They donât hold grudges.â

Jesse said the dogs are a great stress reliever.

âAt work, I have 30 employees. When we get home, we just cuddle with the dogs and not talk. Itâs like an anti-anxiety and de-stress[ing] way to unwind.â ♦