A horse, a donkey and a cat 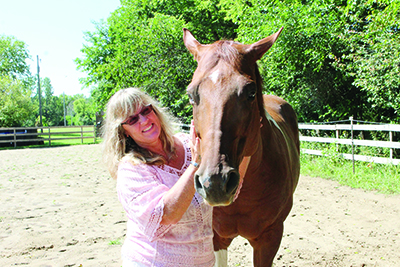 As children often do, Brenda Kaiser once dreamed of having a horse as a pet. When her parents said they had a surprise for her, a young Brenda eagerly anticipated a pony. But when she saw the surprise, she was disappointed. No pony.

As she grew older, she still wanted a horse. Finally, at age 39, she bought one. Kyro is 15 now but was just 6 months old and untrained when Kaiser obtained him. So, to learn how to ride Kyro, Kaiser watched Clinton Anderson DVD horse training videos.

As the Kaisers lived in town, Kyro was boarded at a stable with other horses, but Kyro was the âoutsider.â

âThe other horses would beat him up,â she explains. âI got him away from the other horses.â
She and her husband, Korey, found a home with a small acreage in Waukee for Kyro to roam free. However Kyro â considered a pack animal â needed a companion besides Brenda and Korey. So, then came a donkey named Diego. She found it on Craigslist for $100. 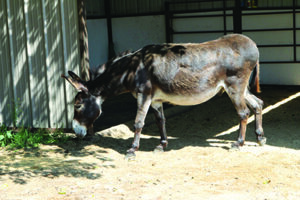 Diego is described as âstubborn,â but the donkey is a good companion for Kyro.

âWe picked the name Diego because it reminded me of the donkey on Shrek,â she says.

Diego was considered a work donkey, as another owner had broke and trained their 4-H cows with Diego. Diego was haltered with the cow and went wherever it did.

Diego and Kyro are both buddies in the same stable; however, Diego gets jealous.

âIf I take the horse out riding, the donkey comes unglued,â she explains. âI have to have Korey stay with the donkey.â 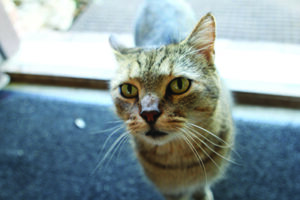 Little the cat is an excellent hunter.

She adds, âItâs a good thing we donât have neighbors close by, because Diego sounds funny and loud when he bellows â especially if heâs upset about being left alone.â

Kaiser once had a foster horse and learned Diego liked having another animal around.

A third pet, âLittle,â is a âgalivantingâ cat that leaves a bounty of body parts on the Kaiser home doorstep from its nightly hunt. Little follows Kaiser when she does chores in the stable. The cat gets along with Diego and Kyro.

âThe hierarchy is: the horse is the boss; the donkey bosses the cat. The cat chases the donkey and other wild animals,â she laughs.

A big deer theyâve named âBuckâ comes around to visit the animals on a regular basis.

âBuck is intrigued by the cat and not afraid of anything,â says Kaiser.

Once Kaiser gets home from work, she treasures the time spent with her horse and donkey.

âThereâs something about coming out here and spending time with my animals,â she says. âItâs something I look forward to all day.â ♦