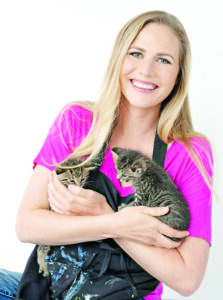 Raising a newborn baby consists of late-night feedings with little sleep. What about newborn animals? Sure, their mother takes care of them, but what if the mom abandons her helpless newborn? Who takes care of them then?

Thatâs where Elizabeth Lyons comes in. She is a premature foster kitten mom for the Animal Rescue League. So far, sheâs fostered 36 premature kittens, all of which were abandoned by the mom cat, found dumped on the side of the road, or given up by humans to the ARL.

Hereâs where the tough part comes in. As kittens are used to suckling on mom at all times, Lyons must provide surrogate care and comfort. That means she sets her alarm, getting up every two hours to bottle or syringe feed the kittens. Itâs necessary for their survival.

âThe tiny neonates need to be fed every two hours because they canât regulate their body temperatures or theyâll get sick,â she says. âWe also use a heating pad under a blanket to mimic the momâs body heat.â

She usually cares for a few kittens at a time. The youngest was just two days old with its eyes shut and the umbilical cord still attached. She keeps preemies until they are about seven weeks old, then gives them back to the ARL for adoption or helps find a home.

She once had six preemies to take care of.

âI already had a litter of five kittens. There was one lone kitten, and we were told that he would do well with another litter,â she explains. âIt was a few too many, but it worked.â 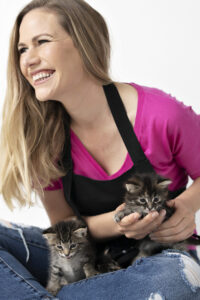 Once the kittens are older, her two kids play with them for socialization.

âWe just sit and play with the kittens instead of watching TV,â she says. âI like how itâs helped teach my family about selflessly caring and letting them go.â

Thatâs the hardest part â loving and learning their personalities and giving them back.

âWe have a cat of our own. Steve tolerates them but isnât affectionate toward them,â she says. âWe havenât kept a foster kitten. We want to have some self control.â

Lyonsâ love of animals started early on as she was raised on a farm. A friend of hers was an animal foster, and she joined a foster group. She noticed a kitten that looked like one she had on the farm and began fostering it.

âI decided to dive right in. I took in four kittens. It was a real eye opener,â she says.

She shares her love of fostering at Kids Create in Polk City, her studio where she teaches childrenâs arts and craft classes. She brings in the kittens to her studio for more socialization to eager kids.

âKids want the opportunities to have hands-on experiences with baby animals,â she says.

Lyons says there are so many sad stories related to orphaned kittens, and she enjoys helping.

âI really like the service component of fostering. Thereâs a huge need to help out. You donât have to wake up every two hours, but identify what youâre able to do,â she says. âEven if you canât foster, showing kindness to animals is a start.â ♦