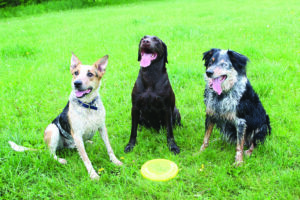 As Shelby Cowgill and her dog, Abbie, stand out in the dew-filled practice field, Abbie gazes intently at the object in her ownerâs hand. Suddenly, Shelby pops her wrist, throwing a Frisbee out in the field as Abbie races toward the flying toy. Catching it in her mouth, she runs furiously back to Shelby and drops the Frisbee, anxiously awaiting the next throw. Shelby tosses again; the return nets four points in round one.

Shelbyâs husband, Colton, joins in the next round, tossing a Frisbee to their German Shepard, Blue. The competition is fierce but friendly, as itâs just another morning spent playing in the K9 Frisbee Toss & Fetch league.

The Cowgills began playing in 2018 with the K9 Frisbee Toss & Fetch league with their four dogs. Any dog breed can participate in the league. Owners provide a throwing disc, as long as there are no holes in it. The Cowgills prefer the heavy-duty dog-specific discs.

The playing field is a 50-yard by 20-yard grid. Each 10-yard level has a point system. Short throws â up to 20 yards â get one point if the dog catches it in the air and then brings it back. A half point bonus is added if all four paws are off the ground with the catch. If paws are out of bounds, points are deducted. Two rounds are played, each 60 or 90 seconds, with points totaled throughout the season. A world-wide leaderboard posts weekly player scores. 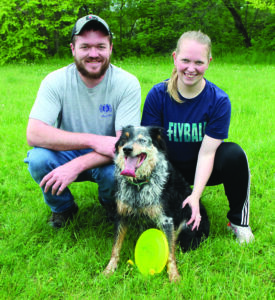 Each round averages about four throws. If itâs thrown short, a player can get 8 points. Colton says heâs very competitive and recalls his best score.

âI once got 20 points. Iâm happy to get even two returns in a minute,â he says.

Blue is a finicky dog, as his toy drive is high.

âWith him, we have to have two Frisbees or he wonât bring it back. We can only throw one, but he has to drop the one we just threw,â says Colton.

Itâs an inclusive hobby, as theyâve had some players in wheelchairs throwing the Frisbees. One dog with three legs plays, as well as a 13-year-old dog that still loves catching. Smaller dogs have shorter legs, thus qualifying for a âtiny dogâ handicap.

âHeâs sensitive,â says Shelby. âYou have to be happy when youâre throwing the Frisbee.â

The couple has traveled for tournaments and met new friends, and each enjoys the exercise. When they arrive at the field, all four dogs clamor to run out and play, which has helped develop their character.

âIt really brings out their personality,â says Colton. âBlue used to be a shy dog, but now heâs the confident one.â

The K9 Toss & Fetch league plays in five-week sessions through the West Des Moines Parks and Recreation Department. Any dog and trainer can still join in on the fun. ♦