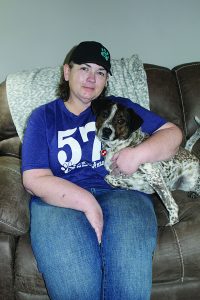 Teri Nizzi Heltâs home has been a refuge to many rescue dogs including Loki and Moose (pictured below). Photo by Jackie Wilson

For the past two years, more than 200 puppies have lived at Teri Nizzi Heltâs home. Not all at once, of course, but if it meant saving a dogâs life, she just might do it.

Teri is the Puppy Patrol coordinator and foster dog coordinator at AHeinz57, a no-kill shelter. She began volunteering with AHeinz57 after sheâd adopted a death-row dog that was rescued from an Oklahoma kill shelter. That dog, Molly, lived for seven years after she was adopted.

Teri works a full-time day job but became passionate about saving animals and volunteering. She even once took seven puppies to the Puppy Bowl â which played opposite the Super Bowl in 2019 â and while she was in New York for the event, she was named 2019 Volunteer of the Year by the Iowa Pet Expo.

âIt was the best day,â she says. âI didnât even know my name had been submitted. I was like, cool, I won.â

As Puppy Patrol coordinator, she helps with mom-dog deliveries at the birthing suite. A camera monitors when mom is going into labor. Puppies are born in plastic kiddie pool tubs, among donated bedding and towels. Each birth is different.

âSome shelters euthanize a pregnant mom, rather than house a mom with nine puppies. Itâs crazy to me they do that,â she says. 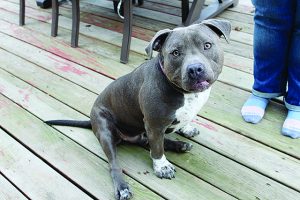 As volunteer coordinator, she ensures the puppies in their foster homes or at the birthing center are healthy. With a âpoop mattersâ motto, Teri will get cellphone photos of, well, poop.

âThatâs how we can tell if the puppies or the moms are OK. Sometimes I even get pics at dinnertime,â she says.

Teri loved animals as a child and used to sneak kittens and rabbits into her closet until her mom found out. She became more attached to dogs when her mom died after being killed by a drunk driver.

âWe went and got a puppy,â she remembers. âIt really helped and gave us something to focus on.â

âIf they canât make it, I go and fill in,â she says. âWeâve got great volunteers and always need more help.â

Currently Teri has three dogs at home. All are âfoster fails.â As the term indicates, the dogs came to foster at her home, and she ended up adopting them. Moose, Loki and Louie share her home, and the foster puppies are kept separate.

âMoose is the funniest dog. I donât think he realizes heâs 60 pounds of muscle,â she says.

Teriâs eyes fill with tears when talking about all the dogs sheâs saved who may have been euthanized.

âWeâve saved thousands of dogs, putting them in loving homes. Itâs rewarding,â she says. âThey are now living the best life. Dogs are like family. They have more toys than my kids do.â ♦