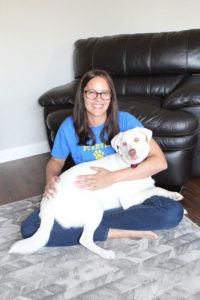 Julie Good says she gets to show her deaf and blind dog, Ray, what it is like to be loved. Photo by Jackie Wilson

Ray is a playful and seemingly happy puppy with a tail that wags when he is pet. His cold, wet nose sniffs at your ankles. Heâll wrestle with chew toys clutched in his mouth. However, his toys donât squeak, and he doesnât play fetch. He canât, because heâs both deaf and blind.

His owner, Julie Good, is a foster dog volunteer with AHeinz57, a nonprofit pet rescue for second-chance animals. She heard about a litter of seven puppies up for adoption. One puppy, Ray, generated a buzz among âPuppy Patrolâ dog lovers. The staff connected with Ray, amazed that he was like a normal puppy. Ray and his siblings needed a volunteer to foster them until a home could be found.

Since Good had already fostered 70 dogs, she took on the litter. She had two dogs at home â Lucy, as well as a deaf dog, Henry. Julie and her daughter worked with the puppies and trained them. Their dog Henry sensed Rayâs disability and would bring toys to his feet.

As a foster dog mom, Good screens potential adoptive families, ensuring the new dog and owner are a good fit. She feels a sixth sense about who treats animals right. As Ray became available for adoption, Good hesitated.

âI struggled. We have to find the right home who knows what itâs like to have a dog who canât see or hear,â she says. âWhat if he gets into a situation, or what if I pick the wrong family?â

She solved the problemâ¦ and adopted Ray.

âThree dogs werenât in my plan. It took a while to convince my family,â she admits.

Good and her family train Ray with touch commands. If they tap on his behind, he sits down. They pat his front, he lays down. If she wants Ray to come, she sweeps her hand on the underside of his chin.

Ray is familiar with the familyâs home and senses where objects are without running into them. If they leave a room, they have to touch him to redirect him. Heâll jump up on the couch or bed but hasnât jumped off.

âHe doesnât trust jumping down, because he canât see below,â says Good. âWeâre trying to work with him so he trusts us to signal itâs OK to jump.â

Trust is a big factor when she takes Ray on walks, so he doesnât plow into something. However, as theyâve fostered other dogs, one dog stepped on Rayâs paw, breaking four bones.

âHe couldnât see the dogs coming and didnât know how to get out of the way,â Good says. âWe felt so bad for him.â

Goodâs biggest fear is Ray getting out by himself.

âIf heâs in the street, we canât call him to come back,â she says.

Adopting and providing a forever home for Ray is an incredible gift, for her and for him.

âHeâs happy all the time. You canât help but feel happy for him,â she says. âHe doesnât know any other way. We get the opportunity to show dogs what itâs like to be loved.â ♦