Gracie offers a paw of comfort. 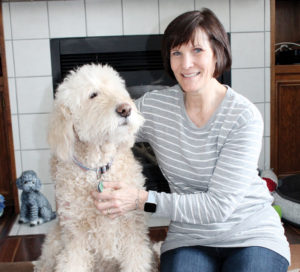 Gracie, a golden doodle living in Urbandale, loved her job. She accompanied her owner, Mary Hester, on visits to Methodist, Blank and Lutheran hospitals throughout her 12-year tenure as a therapy dog. There, she visited sick patients, providing cheer to the visitors and staff by offering her paw to hold hands with patients.

Hester began training Gracie as a puppy. At the time, her middle school-aged daughter had quit sports. Hester was looking for things to do, so they did obedience training.

âIt was something my daughter and I could do together,â she says. âIt was also to help get her out of her shell.â

During training, Hester thought Gracieâs demeanor was perfect for a therapy dog.

âIt (therapy dogs) wasnât as popular back then as it is today,â she remembers.

Hester first began taking Gracie to nursing homes and schools. Before long, she became a regular at the three hospitals.

âI really enjoyed going to the hospital,â she says. âIt makes a difference with the patients. Some kids miss their dogs while in the hospital, so a visit from a dog gives them joy.â

âFor some people, she puts her paw up to them, just like holding their hand,â she says. âItâs like Gracie had a sixth sense that people needed her. She lingered longer with some patients than others. People chit-chatted and told me their stories about their pets. It takes their mind off their pain.â

Often times, after working all day, it took a great deal of effort to go back out again.

âSome days I didnât want to go,â she admits. âBut later it all felt worthwhile. It was my way of giving back to the hospital.â

Gracie felt the same, too.

âSomething amazing happened after a visit,â Hester explains. âIt wore her out. It made a difference for both of us. It seems like Gracie got something out of it, too.â

However, in the past year, Grace recently had to hang up her leash on her therapy visits.

âSheâs 14 years old,â says Hester. âItâs tough getting her in and out of the car because of her arthritis.â

Hester did get another dog, Ernie, to bring on visits, but she learned that he didnât like people, so Mary stopped the training. She still hopes to find a dog with the right temperament.

âTheyâre just like your best buddy,â says Hester. âTheyâre here all the time. Itâs nice having them around.â ♦