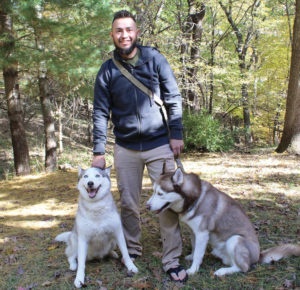 Jake Hommer rescued both of his dogs, Sapphire and Atreyu. He now raises huskies to give to fellow veterans.

When Jake Hommer returned from his second deployment in Afghanistan, he suffered from PTSD and injuries. It took a toll on his mind, as he replayed combat zone scenes. Going from military to civilian life left him confused. What should he do next? For starters, he needed a dog.

He obtained Atreyu, a Siberian husky he rescued six months out of active duty. He says the dog saved his life.

âIt gave me a reason to get out of bed,â he says. âThe dog needed me, so I couldnât wallow in bed anymore.â

As a veteran of the 3 BCT-101st Airborne Rakkasans, he knew other veterans suffered from the same PTSD symptoms. He and a fellow veteran discussed training rescue dogs for veterans. After learning of soon-to-be euthanized dog in a shelter, Hommer declared, âIâm going to get that dog. We can give it to a veteran.â

Hommer looked into obtaining funds and providing veterans with service or emotional support dogs. He attended dog academy training and now trains puppies and rescue dogs through Triple H â Huskies Helping Heroes. The nonprofit provides dogs free of charge to veterans after a screening process. So far, Hommer and his mom, Debbie Hommer, have trained and given away 23 huskies to Purple Heart and combat war veterans and one Silver Star recipient.

Hommer chose huskies because of their easy-going, loyal, loving and working-dog attitude. Jake dispels the myth that huskies are destructive.

âAny dog is destructive if itâs not trained properly. Theyâre known to be stubborn but make wonderful service dogs if you train them when theyâre puppies,â explains Hommer.

One dog that Hommer gave away was to a veteran who was a former soldier living in New York City.

âHe was ecstatic to get a dog. The fact that I can give back to the guys I served with in the same mission really stands out,â says Hommer.
Heâs connected with several veteransâ organizations and says the veterans appreciate the dogs helping them out of their depression. Dogs are trained to cue in on body language and then distract the person to redirect their anxiety.

âItâs cool to hear when someone tells me, âYou picked me up when I was ready to check out,â â he says. âIâve lost quite a few friends to veterans suicide. Knowing you make a difference feels good.â

Debbie agrees and says, âThe dog gave him a mission. For him to train dogs is a type of brotherhood that he felt in combat. Jake has filled that void for other veterans.â

Hommer says itâs rewarding to give dogs to veterans in need. He recalls a veteran in crisis mode. He reflects, âWe took a call from a vet who said his dog was finally taking his commands. Itâs a huge uplift. Knowing Iâm making an impact is worth it.â ♦