Girl waits two years for her own pet. 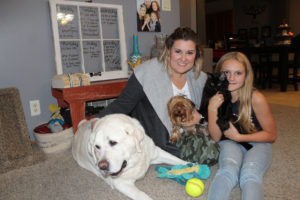 Candi Ladwig, along with daughter Piper, 10, and their three pets, Bentley, Milly and Stormi. Not pictured is another cat, Kitty, who was out chasing mice.

For more than two years, Piper Ladwig, 10, yearned for her own cat. With three other pets at home, she wanted one to call her own and not share with her sisters or parents. So, her dad offered her an incentive: If she hit a homerun during a softball game, Piper could have her own cat.

Piper played softball for the Urbandale J-Hawks league, practicing diligently with her team. She hit ground balls. She struck out. She made it to second base. Last year, she came within inches of reaching her goal after a hit bounced off the top of a fence.

This summer, a friendâs cat had kittens. She gave one to Piper, saying, âIf you get a homerun at the tournament this weekend, you can keep the cat.â

The pressure was on. Her sisters cheered her on before a game, saying, âYou have to hit it, or theyâre sending the cat back.â During the game, her teammates knew the agreement. As she went up to bat, they yelled, âGet a kitty today!â

Piper stood in the batterâs box, saw the pitch and swung. After smacking the ball, she sprinted around the bases and jubilantly crossed home plate. It was an inside-the-park homerun.

After slapping high fives with her teammates, she yelled, âI think I get to keep the cat.â

As she ran to her dad to ask if she could keep the cat, he remarked what a great job she did, then said what most fathers say, âGo ask your mom.â

However, her mom, Candi, said, âNo. You were supposed to hit a homerun out of the park. This homerun doesnât qualify.â

Devastated and tearful, she devised a strategy, but it would wait until the tournamentâs end. The next day, she hit another homerun â but once again it wasnât an out-of-the park homerun.

Now the young slugger had a problem. She had hit two homeruns, which was great, but she hadnât technically fulfilled the cat criteria, and she was already in love with the cuddly black kitten. With a heavy but hopeful heart, Piper composed a compelling letter to her parents and coupled it with a Google slide presentation, pleading her case to keep the kitten. She outlined why cats make good pets, the cost of keeping one, her two homeruns and what her caretaking responsibilities would be.

Piperâs mom agreed to her terms, and Piper kept the cat, which she named Stormi.

Candi says it was important to wait, saying, âThey tried to break us lots of times. Even my family said she deserved a cat. Imagine if I did give it to her. This way, she earned a cat. It makes it all the better when she can actually achieve something.â

Stormi fits in well with the other pets and is best friends with Milly, a teacup Yorkie. Piper says, âMilly is excited to have someone small in the house. They play hide and seek.â

Next up, Piper would like a hamster. Sheâs already made another presentation to mom, offering to keep her room clean for two monthsâ¦ or to hit another homerun.

âSheâs not getting a hamster,â she said, rolling her eyes. ♦