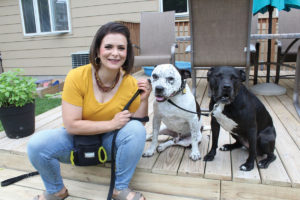 Michelle Hoile does tricks with her two dogs, Joe and Nina.

When Michelle Hoile of Windsor Heights adopted two puppies from the Animal Rescue League seven years ago, she thought it might be a mistake. Joe and Nina, both pit bull mixes, were energetic adolescent dogs that hadnât been trained properly. She thought a puppy class might help.

During puppy class, she became bored with the basics. Asking, âWhatâs next?â She attended a class at Canine Craze and started training the dogs to do tricks. Thatâs when her passion took off.

âIt ignited a fire,â she says. âI was fascinated with the process of how dogs learn through positive reinforcement. I took more dog classes and asked to train dogs.â

She followed a dog trainer for a one-year apprenticeship and is now a certified trick dog instructor. One might ask, âWhy teach dogs to do tricks?â

As Hoile studied dog behavior, she learned dogs are bred for certain purposes. For instance, a sheepdog herds sheep. But exactly what do sheepdogs living in the suburbs do?

âDogs need a job to expel that energy,â she says. âDogs want to feel happy. If theyâre not doing what theyâre bred to do, it can cause behavior problems.â

Behaviors are best dealt with the first 16 weeks of life. Her dog, Nina, was under socialized.

âThe No. 1 job is to expose puppies early on to sounds, such as thunderstorms, a vacuum cleaner and kids playing,â she says. âDo it while the puppy is happy, so they donât have a fearful response to those things.â

Since both of her dogs are pit bull mixes, she works hard to dispel what she says are myths or misconceptions about the breedâs viciousness.

âThereâs a stigma of that breed,â she says. âI honestly wasnât prepared for some peopleâs reaction, and it hurt my feelings. Some people stare and look away from pit bulls. Since Nina is black, many avoid her, thinking itâs bad luck.â

Hoile works hard to make sure both dogs are more obedient than other dogs. By understanding breeds, she knows which dogs get along better than others.

âWhy set them up for failure?â she asks. âSome might want their dog to be a therapy dog, but consider what your dog wants. He might not want to be petted by a stranger. We canât impose our will on our pet if thatâs truly what they donât want to do.â

Hoile says the training aspect of dogs relates to her job as an elementary art teacher. She teaches her dogs to run through hoops, play basketball and give high fives. She rewards with Colby-Jack cheese treats, teaching impulse control. As a result, her dogs never âcounter surfâ and take food off the table.

Her next trick is to take Nina kayaking.

âIâm not sure if it will end well,â she says. âBut dog training is not a destination â itâs a journey.â ♦