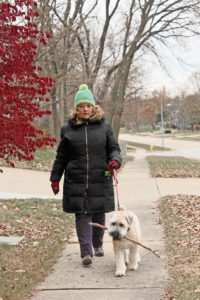 Whenever Kim Coulter takes Buddy for a walk, he has to have his stick in his mouth.

When Buddy â a soft-coated Wheaten Terrier â and his owner invited me to go for a walk with them, I eagerly joined. After all, I was curious to learn about the tale of Buddyâs stick.

Hereâs how it started. When Kim and Matt Coulter took Buddy for a walk in their West Des Moines neighborhood, it started picking up sticks in its mouth. After sniffing in the grass, Buddy would find a stick, clench it with his teeth for a while, stop to sniff again, move several feet and pick up another stick.

âIt was like a game,â says Kim. âHeâd pick one up and then walk with it in his mouth the rest of the walk.â

Before long, Buddy moved on to bigger sticks â ones that are twice the length of his body. Kim began keeping a stick outside the front door. Once she opens the door, Buddy immediately grabs the stick in its mouth, walking down the stairs to the sidewalk.

On this particular walk, a woman in a white minivan stopped, rolled down her window and yelled, âI love your dog! I see him with the stick in his mouth every time we drive by. My kids say, âThereâs the dog with the stick.â Itâs so funny and makes my day.â

The minivan lady is just one admirer. In Kimâs walking routine, strangers, neighbors and other dog walkers comment about Buddy. Kim carries a spare stick in the crook of her arm.

âIf he sees another dog, he comes to me and grabs the stick,â she says. âItâs as if heâs saying to the other dog, âI have a big stick; donât you want to play with me?â Itâs like heâs so proud when he carries that stick.â

As parents of dogs, Kim and Matt try to figure out why pets behave the way they do. Matt thinks Buddy is trying to show off to others â especially to other dogs â that it has a toy and the others donât.

The pair adopted Buddy as a puppy a year and a half ago. It had been about four years since they had a dog, and once their two daughters were grown, it was time to get a puppy. After researching breeds, they wanted a lovable dog with a good disposition.

The Coulters keep sticks at all of the entrances to their home. Theyâve put in sticks with Buddyâs box of chew toys. They enjoy the attention that Buddy attracts, and people often ask the dog to come to their yard to pick up their branches. But most of all, they delight whenever those passing by break out in a huge smile.

âThe best part is when we walk and people in their cars laugh and giggle when they see him. Weâre happy to brighten someoneâs day just because of this dog,â says Kim. âItâs wonderful to have such unconditional love.â ♦