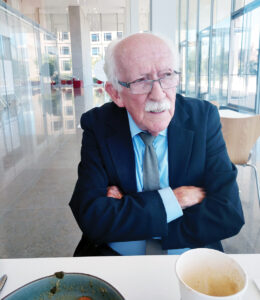 Elvin McDonald is the grand gentleman of Des Moines style and taste. As a longtime editor of Better Homes & Gardens, as director of the Des Moines Botanical Gardens, as a guiding light of the Pappajohn Sculpture Park, the gardens of Terrace Hill, and those of St. Paulâs Episcopal Church, he has done as much to make Des Moines beautiful as anyone else. Since he moved here a quarter century ago, he has been friends with all of Iowaâs governors, plus their spouses and the volunteers who worked in their kitchens and gardens.

He is comfortable with the greatest artists and architects of the 20th century and also with the people who are attracted to local garage sales, where he sometimes buys old copies of his own books. If he were a Shakespearean character, he would be Prince Hal.

We asked him to lunch recently, and he chose Allora, Lisa LaValleâs new coffee and lunch cafÃ© on the main floor of Renzo Pianoâs magnificent Kum & Go Headquarters. Over espressos, gazpacho and white bean soup, we discussed the writerâs life and his intermingled destiny with this city he now calls home.

Because McDonaldâs amazing journey began with a letter to the editor of Flower Grower magazine in 1949, we asked about his childhood.

âI grew up in the Oklahoma panhandle. I had been trying to grow gloxinias in a lean-to greenhouse on my parentsâ farm there after reading about some that Albert Buell had grown in Connecticut. I wrote the letter after little success and suggested that anyone interested in forming a gloxinia society, like the Begonia Society, should write me. That led to hundreds of letters and the formation of what is now called the American Gloxinia and Gesneriad Society.â

How old was McDonald when that happened?

âFourteen.â A prodigy had been unleashed upon the world. âI sold my first story to the New York Times when I was 15. By the time I was in college, at Mannes School of Music and Performing Arts in New York City, I was a books editor for MacMillan.â

Yet, even with his early success in gardening and journalism, he wanted to be a musician?

âYes. I want to be a symphony conductor in my next life. I am the oldest member of the St. Paulâs Choir and have been on the Des Moines Metro Opera Board for 18 years. After three technical directors retired there, I suggested we did not need to replace the position. If the Metropolitan Opera of New York doesnât have one, why should Des Moines?â

McDonald was actually offered the editorâs job at Better Homes & Gardens decades before he accepted.

âYes, I was first offered by Hugh Curtis in 1958. I still have my airplane ticket for that visit. It cost $23 roundtrip. I finally accepted the job in 1995. Kansas City Pride magazine had written a story that impressed Hugh. I had incorporated the Gloxinia Society in Missouri in 1953. I was with the Artists and Writers Studio in Kansas City in 1956 when we were hired to turn a liquor store handout we were publishing into a full-fledged magazine. That was called Bon Appetit, and itâs been going strong ever since. Itâs owned by Conde Nast now and is in One World Trade Center in New York.â

Despite being perhaps the worldâs No. 1 author of gardening books (75 and counting), McDonald has always been interested in all kinds of other things.

âA real turning point for me was when House Beautiful hired an editor from the Los Angeles Times. He asked for story proposals, and I sent several, none of which were about beautiful houses. He loved them all. That led to my getting to write about dinner with the Fords (the first family, not the car guys), Georgia OâKeeffe and opera sopranos. I remember Gerry Ford telling me, âNo one in their right mind plays golf in August.â Betty wrote to ask that I change the wording of âa stiff drinkâ to âa cup of tea.â OâKeeffeâs best quote was, âNo. 1, I always paint to please myself.â

âSoon after, I got to produce âGardens of the World with Audrey Hepburnâ on TV. She was an amazing gardener. She even wallpapered a room with seed catalogues. The Dutch worshipped her, partly because she broke with her parents who were Nazi sympathizers.â

âYes, my partner at the time needed serious health care, and I knew we could do better with that in Houston than New York. I got to partner with architect Laurie Olin there on Hermann Park in the Houston arts district. That would lead to projects with him in Philadelphia and Perry, Iowa.â

McDonald is well known for one liners and T-shirts.

âI pushed for casual Fridays at Meredith. I had a T-shirt that said, âGoogle it before you ask me.â Kim Reynolds told me I should write a book called âPlant Parenthood.â Before the Gateway became what it is today, I called it âPPPP â Pizza, Prostitutes, Pimps and Porn.â I am tired about the push for ânative plantings.â I like the line, âEverything is native somewhere.â â

What has changed most in 28 years to make Des Moines a better home and garden?

âWhen I first got here, Meredith put me up at Embassy Suites. At that time, I was afraid to go out at night and walk around. I finally knew East Village had arrived when a Meredith visitor went shopping there and raved about it. The Pappajohn Sculpture Park is huge; it ended the âPPPPâ jokes forever. The Fleur Drive plantings were a wonderful idea. I credit Janis Ruan and Matt McCoy for saving Fleur from weeding. The redevelopment of the area between the Asian Garden and University Avenue is smart. Even former Governor Ray, who had so much to do with the garden, was pleased that Robert Ray Drive would now dead end before University.â

What are todayâs new challenges?

âI worry about early retirements and finding volunteers. Botanical Gardens retirees today are younger than my children. I finally came to Des Moines in the 1990s because, by that stage of life, I wanted to become more service oriented, like my folks were. Meredith is very service oriented. It was easy to get on boards. I worry that such service attitudes are losing pace. Ivy thrives so well in Iowa that it requires many volunteers to keep it in check. We need them at St. Paulâs, Terrace Hill and many other places.â

Any final words of wisdom?

âBeware of anyone who insists ,âWe always do it this way.â â ♦