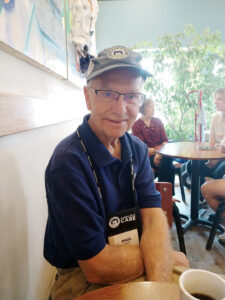 Paul Willis is a Cerro Gordo County pig farmer who has been as successful as anyone in the world for upgrading the taste of pork. He is farmer No. 1 for Niman Ranch Pork, the company he has run since it was created. He was in town last month for Nimanâs annual farmersâ appreciation dinner and conference. We asked him to lunch, and he suggested Zanzibar, a cafÃ© on Ingersoll that is particularly popular with out of towners.

How did he get to where he is today?

âI grew up on a farm in Thornton. I was a Thornton High School Thunderbolt, then went to the University of Iowa, graduated and joined the Peace Corps. I think I wanted to get as far away as possible from my roots. My first assignment was to work with the Nigerian Ministry of Agriculture.â

Was that during the Biafran War?

âYes, but I was working in northern Nigeria, and the fighting was mostly in the southeast. It wasnât the last time the Peace Corps took me to the action. After Nigeria, I took a job as a Peace Corps recruiter and was headquartered in Madison, Wisconsin. That was during the time when Madison became the hotbed of antiwar protests. I was there when anarchists bombed Sterling Hall on the University campus.

âAfter that, the Peace Corps left Madison for Minneapolis, which was considered safer at the time. I became Minnesota and Upper Peninsula (Michigan) recruiter and added Vista to my job description. Then the family needed help on the farm for health reasons. I went back to Thornton to help with the harvest and stayed to put in the next crop. We transitioned to my owning the farm.â

Was the farm raising pigs then?

âNo, growing up we had some pigs raised in A houses, but that wasnât working anymore. A neighbor gave me five piglets, and two were female. I bought seven gelts and borrowed a boar from a neighbor. My piglets actually were productive enough to make money, which was rare at the time. Also, used equipment became very cheap because the factory farms were driving small farmers out of pigs. I bought more feeders, for $5, after a devastating spring blizzard. Suddenly I was raising hogs without much investment at all in electric fencing, breeder stock and 100-200 sows.â

When did the confinement hog lots change the business?

âThat was the late 1980s and 1990s. Pork couldnât compete with chicken when people started caring about fat and cholesterol. So, they bred these lean pigs to claim they were âthe other white meat.â My breeds were being docked for being lean, but my pigs could live outdoors and be happy. At the time, I was unaware that my outdoor pigs had monetary value that factory pigs lacked. Then I was in a California Costco and ran into a woman who was buying organic, free-range chickens. I asked her why she paid more for them, and she said, âThey taste so much better.â â

Did that change your mind?

âIt convinced me to keep doing what I was doing â raising pigs, not pork chops.â

Then you met Bill Niman?

âYes, an old Peace Corps friend told me about him, said he was raising cattle like I was raising pigs. Bill was selling his beef to the highest end restaurants in California. Wolfgang Puck and Alice Waters were his customers. We hit it off. He was the one person in America who understood what I was trying to do. He asked me to deliver 30 whole pigs broken down into primal parts, by the next Monday morning at 5:30 a.m. I found Sioux-Preme packing in Sioux Center would do custom kills, so I could deliver. The numbers kept rising, so I guessed I knew what I was doing.â

When did he know for sure?

âNiman kept asking me for more pigs. I asked a neighbor to be farmer No. 2, and then I took a trip to California. Alice Waters was my first customer there at Chez Panisse. I had no idea who she was or what the restaurant was, but she loved my pork, and that was validation. Then Bill asked me how much (money) I wanted for each pig. No one had ever asked me that; the market just told you how much they would pay. Then I knew I was out of the commodity market and into a specialty market.â

How many farmers raise pigs for Niman Pork today?

âWe are right around 600 and always looking for more.â

Where do the farmers farm?

âIowa is still the biggest state by far, but the states that border Iowa and Kansas are growing fast. This year I visited Alabama, looking to expand our footprint. Met with the Federation of Southern Cooperatives. They used to raise feeder pigs there that Iowa farmers would buy and finish. That ended around 1970. Now they are interested in reviving that.â

Niman is now the benchmark for animal welfare. How did that happen?

âI met a lady named Diane Halverson, who founded the Animal Welfare Institute under the premise that animals raised for food deserve to be raised with dignity. She convinced me to insist on animal welfare certification and to go 100% antibiotics-free. Factory farms had convinced the dealers and elevators to quit making antibiotic-free feed, so we had to convince them to start doing it again. As we grew bigger, that became easier. Also, protest against factory farms became a thing, and people were looking for alternatives.â

What was the reaction?

âSome farmers were amazed their pigs didnât keel over and die. But we started doing taste tests in supermarkets like Trader Joeâs, and, amazingly, customers totally preferred the taste of antibiotic-free pork.â

What do you do today to make sure your pork tastes better?

âWe have stringent taste tests every week. Some farmers take three years of breeding to pass the test. Mostly we have found that Duroc, Chester White and Berkshire pigs do best.â

Those are all heritage breeds.

âYes, and we are reviving them. The factory farms almost made them extinct because they bred for fast growth and lean meat. We breed for taste.â

What else is a secret to the success of Niman Pork?

âThe connections. Restaurants can tell customers which farmer raised their dinner. People love to know the people who raised their food.â ♦