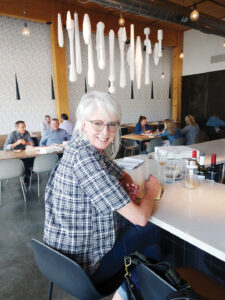 Siobhan Spain is the director of Mainframe Studios, a lower-rent facility for artists and not-for-profit organizations. She has worked with a dozen internationally famous artists in New York, Los Angeles and Santa Fe. Mainframe is in the stretch drive of fundraising with a $500,000 matching grant from the Lauridsen family at stake. We asked her to lunch recently, and she chose the East Village Franka, a pizzeria that features a hanging sculpture by Siobhanâs sister Molly Spain.

Franka is owned by Alex Hall, an Australian who gave up five restaurants in Brooklyn, New York to move to Des Moines. Keep that in mind, as it will seem like a motif in this interview. Over Margherita and arrabiatta pizza, we talked art and economic development.

Mainframe is full now with one floor remaining to open. Is demand for studios keeping up with new rollouts?

âDefinitely. We have had a waiting list since day one. Right now, the waiting list is over 100 strong. We had to instigate a one-studio limit because of the demand, because we want to include as many artists and groups as possible, and because we feared people might just use the second studio for storage.â

Are you surprised at the demand?

âI am not and Justin (Mandelbaum, the developer) is certainly not. His pitch was that the model would be a huge draw.â

And the suck of that draw extends far and wide?

âYes. From the beginning, 20% of our artists moved here from out of state. Our latest artist is moving here from Brooklyn, for the affordable rent. Studios in New York City are pricing artists out of the market.â

Artists being priced out in other places was a pitch for the model, I think?

âExactly. That is why Justin believed this would be such a success here. We believe that this building can recruit creative entrepreneurship and develop the local economy.â

An oft-repeated scenario is that artists are attracted to low rents. Then art lovers visit the art neighborhoods, and restaurants follow. Soon, the rents go up to the point that only restaurants can afford them. But restaurants fail because no one is coming for the art anymore. Howard Johnson was a struggling restaurant when âDesire Under the Elmsâ was banned in Boston. It moved to Johnsonâs town, and HoJo became the worldâs largest restaurant chain.

âThat pattern still repeats itself. Artists have been priced out of Austin, San Francisco and Seattle. Landlords allow artists to move into crappy old buildings and then price them out. Thatâs why they are called âstarving artists.â I hate that term. If we started recognizing artists for their magnetic pull on economic development, they would not be starving.â

How is that working with Mainframe?

âGretchen Bohling was a Chicago artist who moved here for the Mainframe opportunity. She wanted to design sustainable fashion. She began teaching at Mainframe, and that led to teaching at DMACC. She started getting Instagram requests for fashion and tailoring. Those became business off-shoots. She calls her style âslow design,â meaning no waste. She designs clothes on demand so that nothing sits on a rack in a store. She says her reach has developed more than 10 fingers wide because Mainframe is a catalyst that creates new opportunities. We are so lucky to have her here.

âTone is a southside Chicago artist who moved here. His company is called Design by the Street. He is a knowledge sponge, and he preaches to kids that they can make it creating art as easily as by selling drugs. I always take school group tours to see Tone, and a high school teacher told his class they would never hear a better life talk. Tone has one of only 10 machines in the world that can dye fabric as it embroiders it. Nike is one of the other nine who use it. So, he is creating state-of-the-art embroidery in this building, in Des Moines.â

Has Mainframe incubated any entrepreneurial success stories yet?

Gerard Peters Gallery in New York represents some superstars like Tom Joyce and Jun Kaneko. They only represent 23 total artists, yet one of them is a Mainframe artist?

âYes, Don Stinson. He came here when his wife, Barbara Stinson, became director of the World Food Prize. He is a landscape painter, and we are so proud to have him here.â

What domino effect is Mainframe having on Des Moinesâ economy?

âWell, Don Stinson uses Blok. That is a new art supply store; we didnât have one until they opened here. Because of Mainframe, there is a demand for things like clay. You had to go out of state to buy clay before Blok. They can frame 3D art, too â that is state of the art.â

Can Mainframe make it with low rents? And how low are those rents?

âBasically, rents are about $1 per square foot. And, yes, we are paying our entire expenses with only three of four floors open. When the fourth floor opens, all those proceeds will go to our endowment. The model is working so well that Hot Shots in Omaha is copying it after trying it as a for-profit.â

Both Iowa State and Drake are tenants. What are they doing in their studios?

âBoth schools use them for residencies or internships for students. They will rotate residents out every two or three months. The Alex Brown Foundation also uses their studio for residencies in Des Moines. They focus on East Coast artists.â

Any final thoughts on Mainframeâs mission?

âYes, we want to give artists the confidence to dream bigger. The talent is here. Des Moines artists just need to believe in themselves.â ♦