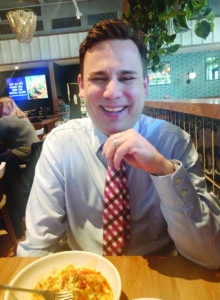 Chris Gloninger is the fresh face of local TV weather. He replaced Kurtis Gertz as TV 8 chief meteorologist last summer after Gertz retired from a 25-year career. Ed Wilson at TV 13 has been here since the 1980s. Gloninger brings a new style and enthusiasm to forecasting the weather, which affects the lives of all who ignore it.

We asked him to lunch recently, and he chose Tupelo Honey, a North Carolina-based southern comfort food chain with a new store in downtown Des Moines.

âI met my wife while we were both working in Milwaukee, and they have a Tupelo Honey, too.â Amidst a bustling lunch crowd, we sat down for shrimp and grits plus po boys and blistered shishito peppers.

Milwaukee was just one stop on Gloningerâs winding road between Long Island and Des Moines. Where has he forecast the weather?

A lot of kids grow up knowing they want to be a doctor or a quarterback. Not many have meteorology on their minds. When did Gloninger know that this was his calling?

âIt was in second grade. Hurricane Bob hit Long Island where I was growing up. We were without power for a week. The damage and power of nature fascinated me. There were sailboats that had been blown up on to the beach.â

And he remained resolute in his commitment to the weatherman calling?

âYes, and it wasnât easy. I tell younger people that you have to tough it out in order to not derail a dream. That was true for me. I was not good at math, and that is a necessary part of the business. But I worked at math. I went to Plymouth State in New Hampshire because they were best known for their meteorology school. My class had 40 majors and only seven graduated.â

Did he meet his wife on the job?

âYes, she was an executive general manager at WISN, which is the Milwaukee sister station to KCCI.  She was one of the people who interviewed me. We were good friends, and then my boss suggested we would make a good couple, so we tried that idea out and were married in 2016.â

Having observed severe weather up close in half the country, what kind of weather awes him the most?

âThat would be storm surges like we had with Hurricane Bob. Tornados and derechos are super destructive, but they are comparably localized. Sometimes you see them wipe out one block of houses and spare the next block. Storm surges just devastate everything. They are also the most difficult weather events to forecast.â

What was the biggest weather event he has witnessed in his first year in Iowa?

âThe Dec. 15 derecho. That produced some 60 tornadoes and wind gusts around 70 mph. The damage to agriculture was stunning, and all types of agriculture were affected. The hardest thing about natural disasters is recovery, particularly for small towns. Winterset and Gilmore City will be working that out for a long time. That is why I think itâs important for us to be on the ground where the problems are.â

And Gloninger has educated himself to help more after an event, as well as in predicting one.

âYes, I now have a masterâs degree in emergency management.â

One of the new wrinkles at TV 8 impressing viewers is the expanded range of âpossibilities and probabilities.â Weather staff break down the whole state into probable ranges of snowfall and temperatures.

âI just donât believe a forecaster should ever say they know what will happen. Being honest means giving folks a full spectrum of possibilities. That also helps fulfill what I believe is the first responsibility of news and weather people â to keep your audience safe.â

So, while preempting regularly scheduled programming to keep people safe, does the station get many complaints?

Does Cloninger miss bigger cities like Milwaukee and Boston?

âNot that much. For one thing, COVID undid so many of the better reasons to live in a big city like going out with the crowd. What I do miss, though, are big bodies of water like the ocean and Lake Michigan.â

What are some of Chris and his wifeâs favorite haunts in Des Moines?

âWe love St. Kildaâs in Valley Junction. Our first big dinner here was at Django; that was special. Proudfoot & Bird is a favorite. I like Caseyâs pizza. I think, in general, there is less room for mediocrity in a town Des Moinesâ size than in bigger and smaller places. Everyone who has never been there thinks New York City pizza is all great. Most of it is not good.

âBesides, who wants the cost of living in big cities â $100 per person dinners, $25 smoothies, $12 coffee, and $25 cocktails or glasses of wine?  Since we came here last year, we continued our determination to eat out and order in more often. That is important to help the local restaurant industry in their struggles with COVID and labor shortages.â

Having grown up in the Hamptons, how much have things changed there?

âItâs overwhelming. We donât even have high school reunions because hardly anyone who grew up there can afford to live there anymore. The first time I took my wife to a party there, she was so intimidated that she overdressed. She quickly learned that yoga pants and track suits are quite all right. It may be expensive, but itâs still a place to get away and be casual.â

KCCI seems to have recruited a great wave of young talent. Talk about a few of them.

âAnne Campolongo, whom I work closely with, is great at keeping weather fresh; it can get stale. TV weather now competes with online services and 24-hour weather channels. You have to think out of the box, Ann does. Amanda Rucker is such a storyteller that it is hard to believe this is her first job. No one used to start out in a market as big as Des Moines. She also complements Cynthia Fodor well on the political beat. Jeff Dubrof brings a Texas-sized passion for sports. Sports also needs out-of-the-box thinkers because of online competition. I donât overlap much with them, but Tisia Muzinga, Kayla James and Lauren Johnson are impressive young talents. Lauren is skilled in multimedia.â ♦