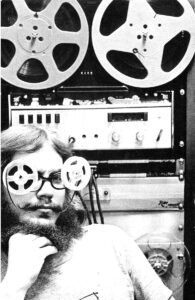 Ron Sorenson has been the leading programmer of progressive music in Des Moines since 1970. We asked him to lunch, and he proposed eating in his office. Mike Wedeking of Flying Mango (and a radio host on KFMG) dropped off some of his heavenly brisket, and George Formaro (also a host on KFMG) provided some South Union bread. I brought cheesecake and crÃ¨me brulee from La Mie. Carryout meals are definitely getting better.

How did Sorenson get into radio?

âThat was something that just happened before I figured out what I wanted to do with my life. I got a job on KFMG in 1967 when it was a classical music station. Bill Plymat, Sr. owned it then, and Bill junior and I were on staff. Bill senior was an Urbandale businessman and would later become a state senator. The station was mostly a hobby to him.

âBill junior and I were into what was then called âunderground music.â That was mostly music coming out of San Francisco and Britain. Jefferson Airplane, Moby Grape, The Mothers of Invention, Buffalo Springfield were all of this genre, and we brought them to Iowa radio,â he said.

âSlowly and almost imperceptibly. Bill junior started doing a show called The Late Folks in 1967. He played Leadbelly, Phil Ochs and Bob Dylan. I started a show called the Roc Show that followed The Late Folks. The new stuff had roots in both folk and rock, and so did Bill junior. He went away to college the next year, and I was tapped to take over his role,â he recalled.

âA group of doctors bought it, and they knew nothing about running a radio station. They didnât invest in sales or promotion. The station manager, Jay Martin, told them they could stem the loss of money with a complete makeover of programming. He suggested appealing to younger listeners with a wide range of music featuring rock that was emerging from the underground. He suggested letting young creative minds influence the programming.

âIn 1970, the owners plunged ahead with a progressive channel. We broadcast from the top of the Brown Hotel, which is now a parking lot. I often thought my career would start off the 11th floor of the Brown and end on the 11th floor of the Hotel Fort Des Moines, but then Jeff Hunter sold the Fort Des Moines and the new owners were not interested,â Sorenson mused.

Ratings went up and then suddenly you were shut down. What happened there?

âIn October of 1970, we got our highest rating ever, and the same month we were ordered to shut down for two months. The ownership group had neglected to find a new home when the Brown was slated for demolition. When they finally did locate a place, it was so low that we lost 40 percent of our range,â he said.

KFMG was owned by the giant Stoner Broadcasting. What happened there?

âThey bought the place for $50,000, which is 10 times what Bill Plymat paid. They tried progressive, but it wasnât what they wanted. The staff was not interested in their vision, which quickly became KGGO with its 100,000 watt signal and comfortable home. I got into politics working for George McGovern,â he recalled.

In the mid 1970s, Sorenson found a new home for progressive music on Hawkeye Cablevision.

âYes. That worked out well. Cable wasnât taking off subscriber wise as fast as many thought it would. So they were open to new ideas. Bill Synhorst had this idea of creating an automated signal that could be programmed on cable, since FM and cable have the same wavelength signals. Hawkeye jumped on it. They used us on two stations and their want ad channel. They kept the one dollar fee for hooking up to FM, and we kept our advertising revenues,â he said.

âThat was Synhorstâs invention, called CLEM. It was four big reel tape decks. It would play continually and uninterrupted by human voices. We only did live programming late at night. The concept caught on, and we did more stuff live. Our studio was in my house, and the equipment cost $10,000. To buy an existing FM station would have cost $300,000 or more. To this day, I get mail from people thanking me for making progressive music available in Iowa back then. Many talk about the personal connections this music lent them,â he recalled.

You published a free monthly paper for a while?

âYes Radio Thrills Monthly. We had comic strips and farcical stories like the dangers of shooting up peas. That was in the early 1970s,â he recalled.

How did the current format evolve?

âIn 2010, Preston Daniels encouraged me to apply for a new low frequency license as a nonprofit. We were off the air for six months in 2010, but we have won the CITYVIEWâs Best Radio Station for 10 years since,â he said.

What kind of programming do you do now?

âCurrently, KFMGâs base is jazz, blues, melodic rock, world and acoustic music. We have a food show, a show about culture in general, a show called women who cook â which has nothing to do with food â a green show about making a more sustainable environment, a Celtic music show, a live home grown show for Iowa musicians, radio theater, alternative country music and a Dead Hour, which is our only syndicated show,â he said.

Is the virus bad for the radio station?

âOh yes. Much like CITYVIEW, we are dependent upon hospitality and entertainment industries, which are hurting. We did an emergency summer fund drive with a goal of $30,000. We got there. So we are OK through February at least. We are also doing our annual fall funding drive. All I want for Christmas is a sugar daddy or sugar mama who believes in our mission. Unlike other public radio stations, we get no money from governments,â he pleaded. ♦