Iowa musician was on the road 235 nights last year. 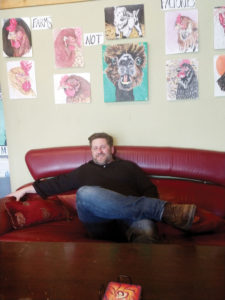 Chad Elliott is an old-fashioned troubadour. He lives in Lamoni but spends two thirds of his nights each year on the road. His songs are often personal stories, and he sings them with an enthusiasm that builds audiences. He reminds me of a younger Greg Brown, whom Elliott calls a role model. We asked him to lunch recently, and he selected Ritual CafÃ©, a Western Gateway spot where Elliott will show his paintings and sculptures. Those are mostly big canvases with a Thomas Hart Benton look.

âI love this place. Itâs got really positive energy and good vegetarian food. I have a vegan bent, but I canât cook,â he explained.

Was he born in Lamoni?

âActually, I was born in Mount Ayr. Lamoni doesnât have a hospital,â he explained.

One of Elliottâs songs is called âChicago 92.â Is that autobiographical?

âOh, yes. I graduated from high school that year in Guthrie Center. I was dating a foreign exchange student from Rio de Janeiro. I almost followed her home, but I headed out immediately to Chicago Art Institute instead,â he said.

The song begins âI said âYou remind me of a young Janis Joplin.â I meant it as a compliment, I swore up and down, but I knew I was getting nowhere with that girl with the red hair. The summer of â92, and thatâs when I found that misunderstandings between 18-year-old hearts are as common as anything going around.â The song also says âI was the sculptor. You were the queen.â It also talks about easels and Chagallâs palette. Was Elliott more into fine art than music then?

âAt this point in my life, I wanted to be an art professor. Years later, I decided to pursue music as a career,â he said.

What were the hardest times?

âRight after 9-11, I flew into San Francisco with $20 in my pocket. I lived on the streets. Made a ukulele out of dish pans and started busking with locals. I played for vodka on the wharf. Fished chicken out of dumpsters and lured Dungeness crab out of the Bay,â Elliott recalled.

What were his musical influences?

âGreg Brown and Dave Moore in Iowa. Tom Waits, Woody Guthrie and Bob Dylan, of course. Lyle Lovett, Kris Kristofferson, Guy Clark, James MacMurtry and Townes Van Zandt from Texas. Lyleâs music got me into that world. I met Clark once in Memphis at a Folk Conference. I remember it was raining so hard on the tarp that I could barely hear. Yet I hung on every word. I was such a fan of Townes that I composed a song at his grave,â Elliott remembered.

Do any places inspire him?

âOh, yes, Memphis and Muscle Shoals are like going home. Austin, Houston, San Antonio, Missoula, Ontario, San Francisco. I just love the American West. Boulder and Nederland are special to me. Last week I was in Bristol, Tennessee, at the same studio where The Carter Family and Jimmie Rodgers got started. Knuckleheads Saloon in Kansas City is a great venue. Touring lets you get to know different places in a unique way. I often feel like a trucker,â he said.

How many nights a year is Elliott on the road?

âI can tell you exactly. In the last year, I was on the road 235 nights,â he replied after checking his phone.

That must be hard on a marriage?

What are some of the stranger places she has booked him?

âFelton, California. It was a club where Ramblinâ Jack Elliott had played, but it had changed ownership and turned out it had become a strip club. One person showed up to see me. Then there was The First Universalist Church in Lanoka Beach, New Jersey. I showed up at an Italian restaurant there, and people started asking for autographs and selfies. There is no way they could have been familiar with the music. Same thing happened at the performance. At least one guy there looked like he was a made man.

âOnce in the Ozarks, I was lodged in a cabin in the woods. After dinner it was dark, and I almost got lost. Finally found the place and couldnât sleep all night because of all the growling outside. There was a black-and-white TV with VHS but only one tape â âWar of the Worlds.â I found out that the ghosts I thought were haunting the place was just a mountain lion outside,â he said.

Elliott has done some songwriting for Iowa Public Television documentaries. Whatâs that like?

âI wrote music for a documentary about immigrants found in rail cars in Denison. I also did the music for the Farm Crisis documentary. Itâs really difficult to make someone elseâs story feel personal,â he recalled.

What is the âOne Horse Townâ tour?

âI limited it to towns with 3,000 population or less. I played for tips. Those towns donât see a lot of entertainment, and they responded really well. I recall bandstands and American Legion halls in Elgin and West Union, among others.â

In ââBible Belt Saturday Nightââ Elliott sings about Jerry, who stutters and spits when he talks to pretty girls, and Jenny, who calms him down. Is it autobiographical?

âNot really. I just love the idea that a girl can endow a boy with grace,â he explained.â ♦