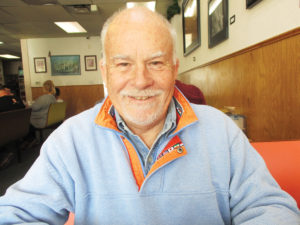 Dick Grangaard is a retired stockbroker. Active stockbrokers cannot talk to the media without jumping through hoops, so I recently asked Grangaard to lunch to discuss a lifetime of changes in the brokering business as well as in fishing, skiing and casino gambling.

At the Manhattan Deli, Grangaard told me that he had his first-ever corned beef sandwich at the same place, back when it was Bassmanâs. A lady at the cash register chimed in that she had her first one at the wind-grieved Pickle Barrel Deli on Sixth Avenue. We ordered and sat down, waiting for our sandwiches to be called. The deli was bustling on a Saturday afternoon, as it almost always is. The only reason they have cut back slightly on hours is a problem with hiring good help, a problem that nearly every restaurant in town has.

What are the biggest changes in the stock market business in 50 years?

âTechnology is responsible for the biggest changes, as with so many other businesses. After programs were written that automatically buy or sell on certain signals, all the lemmings dove in. When I started, you could only buy stocks and bonds at a brokerage, and everyone worked on fixed commissions. Banks didnât sell them. I think it was every Thursday the stock market would shut down early so that they could sort out all the trades. Now you buy anything on your cell phone. The news cycle is now continuous, so the market reacts after hours as well as during the day.

âNow there are many new vehicles like hedge funds and exchange traded funds, too. Today a broker is presenting a full financial picture to a customer. He sells everything so he knows far more about a customerâs full financial situation. Fifty years ago, customers tended to be secretive about their finances. It was like going to a doctor and only letting him look at your right arm,â he explained.

What are some of the strangest requests Grangaard has witnessed?

âWhen I worked in Tahoe in the casino business, I remember busses pouring in from Lodi and Stockton with retirement-age players. One lady would get so drunk she puked on the slot machine she was playing. But she wouldnât let anyone clean it up because she was afraid it would change her luck. Another lady passed out at a nickel slot. In a while, her eyes flickered and she saw me and asked, âChange please?â

âI worked there just less than a year and knew it was time to get out. (Wife) Rose and I got married in the Little Chapel of the Flowers. Its claim to fame was that Dennis Rodman and Carmen Electra were also married there. Our marriage has lasted 40 years longer than theirs. I almost missed it, though. I was having such a good run on the tables that Rose had to drag me out of there to the chapel,â he laughed.

A lot of people dismiss the stock market as gambling. What does Grangaard think about that?

âThatâs ridiculous. The stock market is not gambling; itâs not pure chance. There are so many more factors that go into making choices,â he explained.

If you could go back 50 years and pick out one stock for investment, knowing what you know now, what would it be?

âBerkshire Hathaway. Later there were Wal-Mart and Apple plus Facebook, Amazon, Netflix and Google,â he said.

Grangaard added that 50 years of historic performance gives one pause.

âWhen I started, I only remember four stocks that cost more than $100 per share â Kodak, Xerox, Sears and Polaroid. All of them are pretty much nonexistent today,â he recalled.

An avid fisherman and skier since he moved to Des Moines in the 1960s from Seattle, does he fish and ski more now that heâs retired?

âNot at all,â he smiled.

Have those sports changed as much as the market?

âThere is a saying that the most gullible sportsmen are golfers and fishermen. They will rush to purchase any innovation that promises better performances. I know guys who wouldnât go fishing without the latest GPS and attached trolling motors and computer programs that can remember all their most successful fishing spots and direct them back, adjusted for winds and currents. I know others who have every kind of lure invented lately. I know another who dynamited in the bay by his dock to add depth that attracts fish for dock fishing. I still prefer fishing with live bait. Leeches are nearly indestructible.

âAbout the only innovation I use is the lead core fishing line. You can let it out 150 feet and your lure will plunge to a deeper depth than plastic lines allow. You can put your rod in a holder and wait. Itâs not as much fun but way easier,â he said.

âThe biggest thing is that skis are shorter and shaped, making them far easier to turn on. Boots are far more comfortable now, too,â he said.

How do the slopes handle the different needs of snow boarders and skiers?

âBadly for the most part, though most of the big places now have designated slopes for boarders. Boards throw up far more snow and that really bothers skiers. My eldest daughter lives in Colorado now and has become a boarder. I told her she has gone over to the dark side,â Grangaard explained.

When we lunched, it had just been announced that the U.S. was now an oil-exporting nation rather than an importer. Since that contradicts the narrative of most of post WWII America, what changes does it purport for business?