The dogs of sexism, racism and Syd Klise

Enjoying a Vincent van Gogh at the Greenwood Lounge 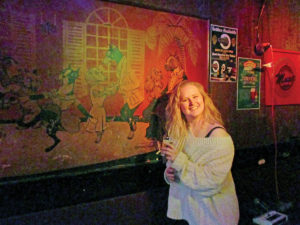 The word enthusiasm deserves more respect than it usually gets. Literally it means âgod within thee.â Sydney Klise is a precocious enthusiast. Recently turned 30, she has owned her own business, Klise Dog, for eight years. She does no advertising, not even a Facebook page, yet she is booked solidly three weeks in advance. Sheâs also booked Thanksgiving through New Yearâs because seemingly everyone wants their dog looking his or her best for the holidays. We asked her to lunch recently, and she chose the Ingersoll Gusto.

âI love (partner) Tony (Lemmo) and the rest of the guys there. Love their pies and everything else they serve plus the service. You can drink at Juniper Moon, and they will deliver food there.â

On our visit, we took a Vincent van Gogh (rosemary olive oil, maple-glazed ham, Genoa salami, goat cheese, capers, fried sweet peppers), her favorite, to the Greenwood Lounge because Klise was on a mission to educate me about the racist and sexist implications amongst the famous Constance Depler dog murals on that barâs walls.

A walking contradiction, Klise is not your typical Johnston business owner, and not just because of her young age. She lives in inner city Des Moines and has her business in the suburbs. (âIâm young, but Iâm not business foolish.â) She has downsized over the years. (âIâve had several more employees, but I would rather be sure I am giving my clients the consistent quality I expect.â) Sheâs a millennial who shuns social media. (âIâd rather not be out there for open discussion.â)

Klise explained that she grew up in Perry and located her first grooming and training business there. When she was ready to expand to greater Des Moines, she chose Johnston because she imagined closing shop in Perry yet remaining close enough to attract her Perry customers.

A golfer, cross country runner and dramaturg in high school, she said she grew up around dogs.

âMy grandfather (Jim Wistrom of Macrae Park Animal Hospital in Des Moines) was a vet. I would hang out and work with him as a kid. I would even watch surgeries. It just never occurred to me that grooming was a career until I began training dogs.â

Training was not her calling.

âThatâs a different temperament from grooming. It wasnât mine.â

Yet she appreciates training immensely.

âMy best clients are trained dogs whatever their breed, but shih tzus and mixed breeds like cavapoos are fabulous.â

What are her worst?

âThe only dog that put me in the hospital was a cocker spaniel. Australian shepherds and huskies are generally hard to work with, but I have some wonderful ones. Pit bulls are actually some of the nicest dogs. Guess where I fall in the nurture/nature debate?â

So where does my education about sexism and racism at the Greenwood begin?

âLook at the paintings on the bar room wall. The dachshund and toy poodle are laid out like Victorian nudes. The Irish setter is portrayed as an oh-so-pretty Irish girl. The basset hound is frumpy, the bartender, either a West Highland terrier or a Tibetan terrier, is obviously male, observant and dependable.

âThe Mexican chihuahua is displayed as ridiculously tiny and insignificant. The Boston terrier is full of attitude, probably because heâs been shot down by the poodle. Sheâs flirting with the Great Dane. Depler painted these not long after World War II. The Danes declared themselves neutral though they became an occupied German territory. Most people think that poodles are French, but they are German in origin. Poodle is derived from âpuddelnâ which meant âwater splashâ in German. They were bred to be water dogs.â

Is there conflict brewing in the murals?

âWell, the English cocker is obviously flirting with both the Doberman pincer and the boxer, another German breed. That canât turn out well. Oh, and on the wall, thereâs a painting of another lascivious poodle. The Chinese crested and the Afghan hound are made to look both stupid and drunk. The Afghan is wearing a fez like a drunken Shriner at a convention. The dachshund just looks happy, and the badger dog, for some reason, has a higher chair than everyone else,â Klise explained.

Moving on to the second Greenwood mural, we see results of the flirting and role playing in the first.

âThe boxer gets the cocker, no surprise. The Doberman ends up with the dachshund, hmm. The Chinese crested seems to be with the Boston terrier, and the chihuahua is again portrayed as tiny in a role of servitude. The cocker and the boxer both look totally disillusioned with each other, incidentally. The poodle is hooked up with the Dane, no surprise. And the dachshund is staring at a painting of a dachshund.

âThe Dalmatian and the Irish setter are an odd match. Dalmatians were bred to be carriage dogs. They ran alongside horse-drawn fire wagons to keep the horses in line. Thatâs their origin with fire departments. The English Bulldog looks a lot like Winston Churchill; I am sure that was intentional. There are some curious sex changes going on between the first and second mural.â

What other insights does Klise have into dog world?

âCocker and springer spaniels used to come from the same litters. Not much anymore. Cockers were better bred to get cocks out of the brush. Springers were for bigger birds. Dachshunds were bred to burrow, and they still love to burrow, no matter how domesticated.â

What is Kliseâs favorite dog story?

â âHachi-koâ by Kaneto Shindo. Richard Gere made it into a movie. The dog is an akito and follows his master to the train station every day and greets him there every evening on his commute return. After the master dies, the dog still makes the same treks daily. In Tokyo, the story is so revered that they built a statue to Hachi at one main station.â ♦