Bob Derryberry at Pho All Seasons

Retired bookie shares his insight and opinions on the gambling scene 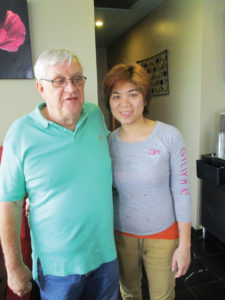 Bob Derryberry is a retired bookie and professional gambler who was the target of a very strange raid in 2003 in Norwalk. We asked him to lunch and suggested Prairie Meadows. He said he was banned for life and suggested Pho All Seasons, or Pho All as its new sign reads. That excellent Vietnamese restaurant on Euclid is owned by Kim Anh. Like Derryberry, she is one of the best poker players in Iowa.

When we visited during soccerâs World Cup, the restaurant was packed, and all TV screens were tuned to the game. The place had more of a sports bar than cafÃ© vibe. Derryberry was a bit annoyed by the cheering of fans. He is an old-school gambler from the wind-grieved days when sports bars would ask you to refrain from cheering. âBecause your win is someone elseâs loss.â As we enjoyed our pho and bun dishes, I asked Derryberry what he thought legalized sports booking would do to the underground version.

âI have heard that (Prairie Meadows President/General Manager) Gary Palmer has already got a spot picked out for a sports book store. I would expect it to be up and running as soon as the legislature approves it. I expect then that the state will change illegal booking from a D felony to a C felony and start picking up bookies. If they throw a few people in prison, they hope that will drive people to bet at Prairie Meadows. Itâs not a safe time to be a bookie,â he said.

Would raising the class of felony be new or unprecedented?

âNot at all. Booking used to be a misdemeanor. They changed it from a simple misdemeanor to a serious misdemeanor, then they changed it to a class D felony. Every time they want to crack down on gambling, they make it a more serious crime. Theyâll do it again. Raids are coming,â he predicted.

During a Department of Criminal Investigation surveillance, Derryberry was raided in 2003 in his Norwalk home by West Des Moines police. We asked him about that jurisdictional curiosity.

âWell, at the time, the DCI was headed by Gene Meyer. He also happened to be the mayor of West Des Moines. I donât even think state law allows that, but he managed it. No surprise West Des Moines would look to seize assets even if they were in Norwalk,â he answered.

After a long, headline-garnering plea agreement in Warren County, Derryberry ended up with three years of probation and a fine. What happened?

âWell, there were a lot of irregularities. There were 26 Franks violations (false, omitted or misleading statements given in affidavit) in their search warrant. The judge threw them all out. One cop even took mail out of my mailbox illegally,â he said.

There was also a strange romantic relationship.

âOh, yeah. Rose Yacavona was a girlfriend of Bill OâKeeffe (an FBI agent who investigated Derryberry) before I started dating her. I never knew that or I would not have had any involvement with her. She became their informant against me,â he recalled.

So in the end, Derryberry did no time?

And that was the end of your career as a bookie?

âI have never booked since then,â he said.

Fifteen years ago, when Derryberry was forced out of the bookmaking game, the poker world was changing. ESPN and other networks began covering tournaments, particularly Texas Hold âEm, and glamorizing the game. That had to be a great time to be a professional gambler, when fraternity brothers wanted to sit down in the poker room with the big boys and everyone wanted to be a player?

âOh, yeah, we had a lot of that here in Iowa. Lots of students from Iowa State showed up after watching ESPN,â he laughed.

Anh joined us, and I asked both gamblers about their current status, or non-status, at Prairie Meadows.

âI signed myself out as a player. I got in a fight with a floor manager and swore I would never take my business there again. Two and half years later, I would like to go back, but after you sign out you have to wait five years to come back. Omaha is a two-hour drive each way, so my game is getting rusty,â Anh said.

âI was banned for life, and no one will tell me why. Some people who should know say they donât,â said Derryberry.

Both players admit they complained about suspicious activities in the poker room.

Derryberry explained what collusion in a poker room is.

âIf four guys work together, they all sit in the same chair every time they play. An outsider is certain to lose at that table because the colluders will raise the pot with no hand to justify it, so their partner wins bigger pots. The outsider canât afford to lose big pots and win small ones,â he explained.

Both gamblers said that four players were doing that for quite some time.

So what is the state of this today?

âTwo of those guys moved out of state, in different directions. Rumors persist that Prairie Meadows is missing maybe a million dollarsâ worth of $500 and $1,000 chips. The IRS found that employees were not filing SARs (suspicious activity) reports on the colluders, so they didnât have to pay taxes on the money they won. I hear now that the IRS is present at the casino 24-7. They moved the poker room from the fourth floor to the main floor so they can supervise it better, and I hear they fired three employees, and good luck cashing in chips. If you have $500 or $1,000 chips, the cashier will ask you where you won them and will call the station to verify it,â Derryberry said.

âIf you say you won it long ago, or that you found it, they wonât cash them in. Thatâs not fair to all the people who never cheated. Even at Caesarâs Palace, they wonât cash old chips. Donât ever take chips to collect a debt,â Anh added.

âI saw a big sign the last time I played poker there. It said, âNo Collusion.â I asked a floor manager about that, and he said, âIf youâre colluding and you donât end up in the river, you will end up downtown, for sure,â â he said. ♦