The state of the arts of murder and suicide 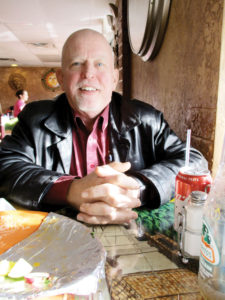 Polk County Medical Examiner Dr. Gregory Schmunk is a bona fide celebrity in his field. He was the forensic consultant for hit TV series âCSI,â âCSI Miami,â âBones, Rizzoli & Isles,â âThe Blacklistâ and âRosewood.â He has also made multiple appearances as himself on âForensic Files.â Prosecutors in Des Moines have told me that heâs a brilliant expert witness, that he even asks them to never object when he is being cross examined, no need. Others say that kind of arrogance scares them.

We asked him to lunch last month at Mariannaâs, a superb little taqueria on University. A long-time Californian, Schmunk says Mariannaâs is a good example of Cal-Mex.

Smitten with crime show addiction, I started by asking him about working on the TV shows.

âI think the original âCSIâ was the best of them all. Everyone from the story runners to the cast was seriously interested in getting the science right. It was brilliant. I was sorry to see âRosewoodâ did not get renewed; that was a good show. They all were. I am proud to have been part of them.

âBilly (CSI star William Peterson) testified before Congress to encourage more funding for forensics. So did I. I appeared before the Rockefeller Committee on the same matter. Billy was far more successful than I was. He may not be a real doctor, but he played one on TV,â he recalled.

Schmunk has worked in Seattle, San Diego, San Francisco, Los Angeles, Philadelphia, Sacramento and San Jose. He also held a teaching position at Stanford. So how did Des Moines attract this star?

âI also had a stint as Chief Medical Examiner in Green Bay, and I was originally from Ohio. I love the Midwest. Some of those big west coast cities are not ideal places to work. The examiners offices in San Francisco were an absolute pit. They have built a new place now. The politics in San Jose were not helpful for medical examiners,â he said.
Schmunck talked about some cases that affected him the most.

âThe ambushes last year of the local police officers. My staff and I get so close to law enforcement that those were really hard on us emotionally. Those were two of the only funerals I have attended. Wooters (former medical examiner Richard) went to all of them. I just canât do that.

âWhen I was in Sacramento, a Good Guys store was taken over by an armed Cambodian youth gang. They tied all the hostages up and demanded $1 million and transportation to Cambodia. They also demanded vests. Police delivered them over the door and a sharpshooter took his shot, which exploded the door and hit a bad guy who then killed all the hostages. We set up a temporary hospital in a bank. One of the hostages had been shoplifting, had some super booster pants on. Hereâs the thing, there were maybe 50 family members there to identify the bad guys. That taught me two things. Even gangsters have families who love them, and our primary patient is the surviving families. Thatâs why we do autopsies first thing in the morning, so that families get the bodies back faster. (The county attorney respects the ME enough to only schedule him for court in the afternoon.) There is probably no other line of work where you have to tell people about the death of a loved one so often. Many of us develop a dark sense of humor for our own protection,â he recalled.

What other cases moved Schmunk?

âWe had a 2-year-old who ruptured his heart riding a motorcycle. There is no possibility of chest protection for a child that young. Such a waste. In Santa Clara once, I had a case where a young guy said he had great sex but when he woke up his girlfriend was dead. He had two strikes so he threw her in a dumpster, and she ended up wasting away in a landfill. A cadaver dog, from the Oklahoma City bombing, found her. Her organs had all wasted away except for the brain and heart. That was enough to determine cause of death (COD) and homicide. If you donât get a COD by the time youâve seen the chest cavity, youâre in trouble. In Wisconsin, I had a case in which an older man had befriended a 20-something guy and ended up cutting him into 50 pieces and disposing them in 20 gallon drums. It took all day to put the guy back together, and we never got a COD,â he said.

How are murder and crime trending today?

âStay out of Mississippi. Over 25 percent of all the cases an examiner sees there are murders, and many are with automatic assault rifles. In Iowa, itâs almost always handguns. There isnât really an Iowa crime profile. Most crime is drug and gang related, not much different from California. Domestic violence is universal. Our case load is up almost 10 percent in a year. We get a lot of our business from certain addresses, old hotels and strip bars. Suicide is the growth industry. Suicides here outnumber murders nearly four to one. Opiates have a lot to do with that. Itâs really hard to determine a suicide from an accidental death when drugs are involved. Hangings have been popular here lately; thatâs odd, too. Most suicides prefer drugs or guns. Hardly ever see anyone drop on their knife or sword anymore. Too painful,â he concluded.

What has changed here since Schmunk took over?

âWhen I started, we had two full-time medical investigators. Now we have nine. Our caseload has gone from 2,000 to 3,500 a year. We try to curtail autopsies because accreditation depends on keeping the autopsies per examiner down. We and the state of Iowa are the only two accredited medical examinerâs offices in Iowa, and two of only 90 nationally,â he explained. ♦