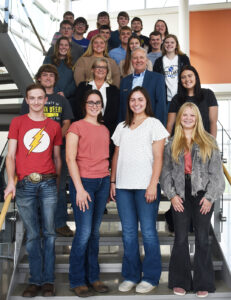 DMACC, the largest undergraduate college in Iowa, is pleased to announce its 2022-23 class of Mark Pearson FFA Leadership Scholars, which includes a total of 25 outstanding students from across Iowa. Each student is attending DMACC on a full-tuition scholarship during the 2022-23 academic year through the competitive scholarship program.

The Mark Pearson FFA Leadership Scholars Program has awarded nearly $2.3 million in full-tuition scholarships to qualifying DMACC students since its founding prior to the 2016-2017 academic year at the College. The scholarship program was established in honor of beloved ag broadcaster Mark Pearson, who passed away suddenly in 2012 at the age of 54.

âSome of the greatest leaders in Iowa, across a variety of career fields, have an FFA background,â said DMACC President Rob Denson. âDMACC is proud to play a role in helping the next generation of leaders prepare themselves for their careers, and we are honored to continue sharing Markâs legacy and passion for his profession with todayâs students.â

Each year, 15 scholarships are awarded to first-year DMACC students through program, including one student from each from Iowaâs six FFA districts. The scholarship recipients can enroll in any degree program at DMACC, and the scholarship will pay for the completion of their degree.

To qualify for the competitive Mark Pearson FFA Leadership Scholars Program, students must 1) serve as president of their FFA chapter during either their junior or senior of high school; 2) apply for the program during their senior high school; and 3) commit to attending DMACC the fall following their high school graduation. The application period for the scholarship runs from Nov. 1 to March 1 each year, with scholarships awarded in April/May for the upcoming fall semester.

The 2022-23 class of Mark Pearson FFA Leadership Scholars includes the following students, who are listed with their hometowns, areas of study and year at DMACC (first year or returning):

The Mark Pearson FFA Leadership Scholarship was officially created in April 2016 during an announcement made in the Formal Office of the at-the-time Iowa Governor Terry Branstad. Pearson was the host of Iowa PBSâ âMarket to Marketâ program for more than 20 years and was the host of WHO Radioâs âThe Big Show.â Pearson was a Madison County farmer who also served as an Assistant Secretary of the Iowa Department of Agriculture and was the Markets Editor for Successful Farming Magazine.