Did you guess whoâs behind the mask? 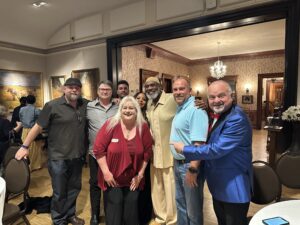 DES MOINES, Iowa. (October 24, 2022) â Did you guess who is behind the mask? On October 22nd at Hoyt Sherman Place, Lou Sipolt hosted the first ever Unmasking The Singer event in Des Moines and it was a HUGE success, raising over $30,000, and thecontest is not over yet! All contestant kettles are open through October 29th at noon and you can still vote for your favorites now that you know who they are.

Who were behind the masks and who won the singing competitionâ¦?

Vote for your favorite to win Biggest Unmasked Fundraiser 2022 by visiting www.bit.ly/unmaskvote2022 and vote by October 29thh at noon.  $1 equals 1 vote! Unlike Election Day, you are encourage to not only vote, but vote often!  Links to videos of the performances and reveals for each contestant with be up by tomorrow on their voting page and on Facebook @salarmydm.

Did you know thatâ¦when you vote for this event it helps The Salvation Army serve our neighbors who need a little extra help in this crazy economy to sustain their housing, to keep their utilities on, to keep food on the table, to buy medication, to provide Christmas toys and food for their children.  Your votes help our unsheltered friends with food, hydration, winter clothing, etc. and allow us to be able to continue to meet the increasing needs of those in our community.

âThe event was a huge success and we are grateful to all our sponsors for their support as well as the Lou Sipolt, our judges, all our singers, The Salvation Army officers and staff, and the volunteer committee that helped pull off this first of itâs kind event in Des Moines!â said Tamyra Harrison, Development Coordinator for The Salvation Army.  âEveryone worked so hard and gave it their all to give a great show and the result was so much more than could have hoped for.  We are already being approached about next year.  I need a nap first.â