The gift of whimsy

Donât get me wrong, there are serious problems in the world, and serious people are needed to keep us from killing ourselves and killing each other and to make sure we add baking powder to the cake batter. That tablespoon of baking powder is the difference between a cake that is light and fluffy and a cake that looks like a hubcap. I know. So, bring on the serious folks to save the planet and our cakes.

But is there a role for whimsy in all this? Do we need things that are nothing but fanciful with a dash of humor? You know, things that, when you see them, your pursed lips involuntarily turn up and your eyes uncharacteristically crinkle. Iâm not asking for outright guffaws, heaven help us, but maybe something where you nudge the person next to you and say with a grin, âLook at that!â

But where to find this whimsical fantasy?

Iâm with my wife in Cologne, Germany, mildly lost as we generally are in our travels â and in life, for that matter. We walk up from the river and away from the famous cathedral toward a less touristy area. The buildings are grittier and the people we pass are clearly workers either coming or going. 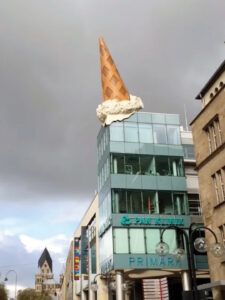 My wife and I are having our traditional travel conflict. This is a fun fight where my wife bemoans the inability to use our smart phones for directions because I have failed as a husband. This failure can arise in various technical ways dealing primarily with SIM cards, whatever they are, but suffice it to say that I am truly guilty, and if my wifeâs phone did work, sheâd certainly be contacting her college sweetheart, Chuck, the true love of her life, and get the heck out of Dodge. Or Cologne.

As we both simmer, we see in the distance an office building. Nothing special, . . . but is that an ice cream cone on the roof? Whaaaat? A DRIPPING ICE CREAM CONE TURNED UPSIDE DOWN IS ON THE ROOF!!!

Not only did this sight save our marriage, but it made us smile. It brought us outside of ourselves. It brought us into a land of curiosity and wonder. It was whimsical.

âLook at that,â I say with a grin.

Claes Oldenburg created this ice cream cone in 2001 along with his wife Coosje van Bruggen, who died of breast cancer in 2009. 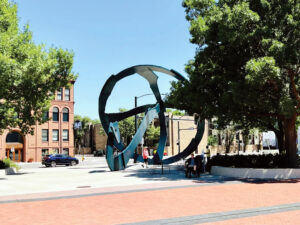 Of course, Oldenburg and van Bruggenâs work was not foreign to me. When we arrived in Des Moines in 1981, we would bike from the Attorney Generalâs Office up near the capitol to our apartment in the Drake neighborhood. This meant going through downtown.

âWhat in the heck is that?â I said to my wife, as we pedaled through the heart of the city with our backpacks full of our work clothes and lunch pails and anything else a young lawyer was supposed to carry.

There in the middle of Des Moines was a gigantic umbrella. No kidding. An umbrella. It appeared to have no purpose, no hidden meaning, no artistic subtext. It was just a giant umbrella.

We got off our bikes and smiled. Of course, we didnât laugh out loud, not in the land of Grant Woodâs grim-faced, pitch-forked farmer and his scary sister, but our eyes did crinkle and our lips went up. 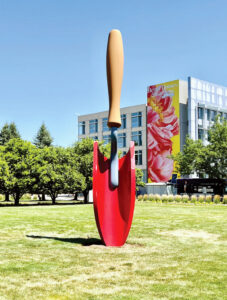 âWill you look at that?â

Then there is the giant trowel created in 2001 and purchased by Meredith Corporation. Itâs hard to take yourself too seriously in the presence of a garden trowel bigger than your car.

And the very first public Oldenburg in Des Moines can be found at the Des Moines Art Center, commissioned in 1971, way early in his career â talk about an art center out in front of the crowd. And, yup, itâs a ginormous three-way plug. Whimsy, anyone?

As Laura Burkhalter, the friendly and helpful curatorial manager at the Des Moines Art Center, told me about the three-way plug:

âOur philosophy at the Art Center has been that when we go after an artist, we go after THE work â the one that shows that artist. This is an Oldenburg. Itâs big. Itâs blue. Itâs soft. Itâs humanistic. It is a quintessential Oldenburg.â 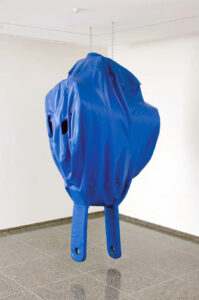 Listen, I am not an artist and my knowledge of art could fit on the tip of a paint brush, but what is a bit of whimsy worth? What is the value of an unbidden smile that exists for no reason but fun? How often do you see something that gives you a heartwarming surprise after your friend has elbowed you in the ribs and said, âWill you look at that?â

Claes Oldenburg died the other day. I didnât know him. I donât know how to label his art. I know nothing of his vision. But I do know this: thanks to the Des Moines Art Center and Meredith and the Civic Center, Oldenburg gave Des Moines a great public gift. He gave us the gift of whimsy.