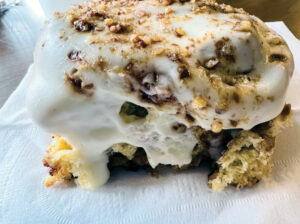 If you are lucky, you will wake up some morning and smell a doughy, cinnamon concoction drifting up the stairs. The smell will slip under your blankets, tickle your chest, and settle on your heart. It promises a lot. Love, certainly. Home, of course. Joy, without a doubt.

My mom made cinnamon rolls when I was young. We eight kids worshipped them. Two pans of cinnamon rolls lasted mere moments after being taken out of the oven. Rarely did she have time to put on frosting unless the horde was beaten back. So we ate them both frosted and unfrosted, carameled or uncarameled, brushed with more butter or less butter. Heaven.

As I aged, I discovered the world of hair-netted, white-aproned, older women who baked gigantic, fluffy cinnamon rolls dripping with goo. I fell in love. These women could be found in school cafeterias, in church basements, and in the church tents at Iowa county fairs. My friends would be on the midway screaming as they were spun around on the Scrambler while I sat in the church tent with a cinnamon roll the size of a plate. I may not have found Jesus in that tent, but I did find salvation.

So when my taxicab driver mentions cinnamon rolls in the same sentence as âbutter and love, baby,â I am all in.

Lee King is loud and fierce and sassy. Her braided hair sits long on her shoulders. Her smile wide and open. Her eyes clearly say sheâs up to no good, and, if youâre lucky, you might be invited along.

Lee laughs heartily as she steers the car through the construction on Fleur Drive.

âIâve been driving a cab for eight months. I was just looking for a side job, but then I started meeting good people. I want people to laugh, to have fun while theyâre in a cab. Thatâs my goal.â

Are you kidding? What about all the angry people out there? They donât seem up for a fun conversation. 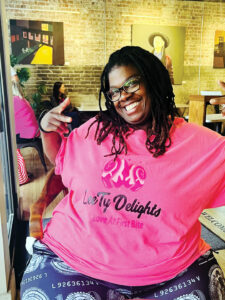 âHah! Listen, I was driving this guy who was handicapped to the homeless shelter. We talked the whole way. When we got to the shelter his cab fare was $30. He tipped me $50. I was shocked. Youâre at a homeless shelter? Why would a person do that?â

Lee pauses and laughs to herself.

âHe said I made his day by just talking to him.â

I believe it. Lee could charm a rock. But enough of that, what about cinnamon rolls?

âWell, over two years ago, Cinnabon in Jordan Creek, where we used to go, closed down. So, Ty, my wife, decided to make cinnamon rolls one night with my daughter. Later, she woke me up and said I had to try one.â

And that was it?

âWell, we tested them on various folks, and they loved them. So we just started going around to local barbershops and selling them. And, again, people loved them.â

Local barbershops? What about bald people? As I wiped the shine off my bald head.

We called ourselves âLeeTy Delights,â and my cousin came up with the slogan, âLove At First Bite.â Can you believe it? We stumbled upon a business, and it blew up. It just blew up. And weâve been rolling ever since.â

Lee sits back and shakes her head.

âThen Ty decided to try different flavors. Our first different roll was pecan. Everybody loves those. We then went wild with flavors.â

What do you mean?

âWell, the banana one. We started doing a crust on the bottom. It is almost like a pie. Itâs a banana pudding in our dough with a crust. It is our most popular flavor. We invented the cinnamon roll with a crust.â

My, lord. Do you ever have doubts about a flavor?

âOK, I was concerned about the white chocolate raspberry. That flavor is just weird. Who will eat this? Ty told me people will love it. And people LOVE IT! Ty is a mastermind. She is a weird genius flavor person. Man, itâs crazy.â

Crazy enough for people to buy them?

âWeâve been to the Downtown Farmerâs Market twice and sold out both times. And we sell at Friedrichs Coffee and at the Slow Down Coffee Company.â

How do you do all this?

âOur schedules are crazy. I donât know what rest is. We are running our kids to soccer and Isiserettes, baking cinnamon rolls, and driving a cab. Iâm exhausted. And I love it.â

Of course, you do. Listen, itâs just the two of us here. And I wonât tell anyone. Promise. Whatâs the secret to your cinnamon rolls?

Lee gives her wide-open smile, and in a deep voice says: âButter and love, baby. Donât forget that butter. If you donât have that butter, it just isnât going to be the same.â