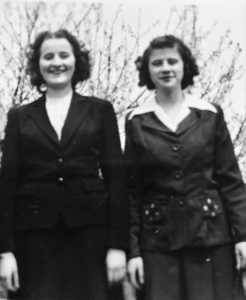 The two young girls shared nearly everything. No surprise. The Great Depression guaranteed a certain equality even though the girls were four years apart in age.

She smiles at the memory.

âAnd did the two of you fight?â

âOnly when I wanted to play dolls and she became too old to play with me.â

She frowns, clearly still not happy at her sisterâs decision â 90 years ago. Yup, whoever said time heals all wounds apparently never had a sibling.

In truth, these two sisters were very close. They grew up on the farm but left home early to go work in the city. Eventually they both ended up in Indianapolis. Working in businesses. As single women during those times, they lived in a boarding house for women only. Their home had rules for most things, but particularly forbidding visits by men and requiring a strict curfew at night.

But these were the war years. Two of their roommates were related by marriage â the brother to one roommate was the husband to another.

âAnd I remember to this day the knock on the door by a man in full uniform. We all knew what that meant. And just like that, there were two grieving women. Our home was a sad home.â

World War II ended, and both sisters went to college at Iowa State University. Boys and dances and more boys and more dances. A good time for all.

This didnât matter. They were close in other ways: letters, during the early years; in person, during the middle years; by phone, most days in the latter years. They shared news of birthdays and jobs and promotions and weddingsâ¦ and what one or the other was making for dinner that night. The big and the small. It really didnât matter to them.

And donât get me wrong, it wasnât all roses. They were stubborn women who at various times thought the other was too stubborn and clearly incorrect. But then theyâd talk the next day as if no disagreement had occurred. Peas in a pod? Of course. 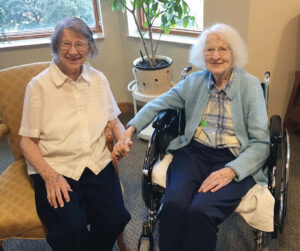 And finally the older sister could neither talk nor listen.

âIâd like to put this rosary into the casket with my sister,â my mom says as we drive across Iowa to the funeral. âI want her to have it.â

She holds up the rosary for me to see.

âI donât know,â I say to her, wary of my momâs doggedness. âI think her religious community is deciding what goes in the casket.â

âHmph,â she responds with arms crossed over her thin, 94-year-old chest. My answer is clearly unacceptable. Although Iâve been down this route before in years past, as various family members plotted to put things in or take things out of a casket. Never a good situation.

The casket sits open before us. The older sister lies on a pillow with a rosary wrapped around her crossed hands.

My mom puts her hands over her older sisterâs hands as we stand together looking for the last time.

âListen, Iâm going to slip this rosary down next to her body,â she whispers loudly.

âI think that is a bad idea.â

My mom glares at me as we stand at the front of the church.

âOK, how about we just ask the head nun if it would be all right to leave the rosary?â I suggest.

âIt is a lovely idea,â she says to my mom.

âIn fact,â she continues, âyour sister told me before she died that the rosary she is holding right now is a special one from Rome and she wants me to give it to you before we close her casket.â

My mom is dead silent.

âSo why donât we take your rosary and wrap it around your sisterâs hands, and you take the one she has.â

We walk away, and my mom leans into me and says in her loud whisper: âWhat do you think of that?â

Hmmm. I just saw two sisters who talked to each other, even after death. Thatâs what I think of that. ♦