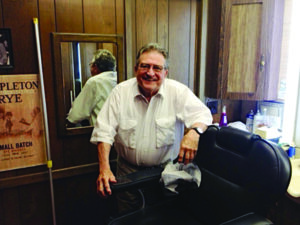 The parking lot is full. Men in dress pants and jackets. Women in dresses and skirts. Many my age, but I recognize only a few souls. In hushed voices, we enter the church. Itâs a weekday afternoon.

The obit read: âYes, thatâs a Monday, Samâs day off. We knew he would not want to miss any work.â

More than 35 years ago, I walk into the shop on 42nd Street without an appointment. A man with a kind smile is cutting hair. He tells me to sit and that heâll be right with me. He goes back to his conversation with the guy in the barber chair.

I pick up a newspaper.

Now you may be wondering what Iâm doing in a barbershop. Believe it or not, there was a time I had some hair. Not much. But some. And my wife directed me to get the few hairs I had cut. This was all part of my wifeâs ongoing program to make me presentable to the public. A thankless task. So here I was at Uptown Barber Stylist trying to get some style.

I found something else.

All before I even get in the chair!

It dawns on me that this is a sacred place, and this job of getting a haircut is a sacred event.

And I become a fan, even though I have no hair to cut.

Sam told me this last winter. He was always a philosopher, but he carried the mantle more openly as the years passed.

âUnfortunately, living a specific number of years is not the real gauge of âold.â You are not old because you are not as handsome, or because your step is challenged, or because you have a different body ache daily,â said the handsome Sam the Barber.

Really? Old is all in your head?

âItâs kind of crazy! I donât see ME in the mirror. When I see a photo, I just say Iâm not photogenic anymore.â

Then what is old, Sam?

âYou are old when you canât physically and mentally enjoy how wonderful life was when you fell in LOVE!â

A romantic down to the marrow. Sam then always made fun of his âfoolishâ self. But then he would make the same romantic observation again â just in case you missed it.

Several years ago, he talked about retirement.

âWhen I retire, Iâll probably go to work for Trader Joeâs. Cause I like that store. And, you  know, I have enough personal skills I could get hired out there. In fact, everybody out there ought to be my age. Cause we go to work. We donât get sick. We just die. If he didnât show up, well heâs dead.â

This honesty is unnerving in a guy with a scissors so close to your ears.

A guy who says things like: âThere is really only one attribute youâre looking for in a woman . . . itâs that she likes you for you. And then you can look for something else you like about her. If you donât have that one, you have nothing.â

Saint Anthonyâs Catholic Church is full. The family greets each person at the door. I sit uncomfortably in the back of the church where I imagine the unbelievers should sit. The priest, Father PJ McManus, talks about the emergency haircut he got from Sam when he was just a little boy, and this story leads to the return of Lazarus. Colin Reese, Samâs son, talks emotionally about the lessons his father gave him growing up and as a grown man. The chorus sings beautiful haunting hymns.

I wipe my eyes.

Samâs mantra rings in my ears: âCause we go to work. We donât get sick. We just die.â

And he did go to work.

And he didnât get sick.

And he did just die.

But didnât he have a hell of a lot to say to the rest of us in the in-betweens?

May Sam rest in peace. ♦