My wife and I have major parts of our bodies that have never seen the light of day. 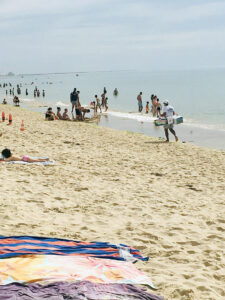 The endless white sand beaches of southern Portugal are baked in bright sun, sprinkled with salty air, and filled with thousands of people up and down the coastline. Families, teenagers, the very old and the very young.

We are so not beach people. Coming from Northern European stock, my wife and I have major parts of our bodies that have never seen the light of day. We donât quite bathe in our long underwear, but if the sun does hit a patch of my wifeâs skin, the choice of colors are red or bright red.

So we come to the beach with hats, sunglasses, long-sleeved sun shirts, umbrellas, SPF 1000 sunscreen, and large beach towels wrapped around our legs. Eye-catching.

Whereas everyone else comes to the Portugal beaches with, you guessed it, a thong.

Yup, a thin piece of cloth that seems, at most, an afterthought. And I mean âeveryone.â OK, not the men, but every adult woman, regardless of age and regardless of any preconceived notions of the âproperâ size or shape, wears a thong.

Iâm not really sure how to think about it. On the one hand, my traditional religious upbringing tells me to look politely away because they obviously left the house forgetting to put on their pants. On the other hand, my old-man sensibilities are that life is short, the body is beautiful, the less clothes the better â âlet freedom ring.â

And I get whatâs going on. The heat and the bright sun and the sand and the water all whisper in your ear that there should be no barrier between you and the elements. I remember my oldest boy when he was a child and first saw Lake Michigan. He ran ahead of us, down the sand dune, screaming with delight and shedding clothes all the way to the water, where he stood as naked as Adam and Eve in the Garden.

It just makes sense â¦ as I adjust my long underwear and peek out from under our umbrella at the people having fun.

My rumination ends, however, when I hear a sing-song shout over the beach crowd:

Given my carny relations, I recognize the bark of a vendor anywhere in the world. 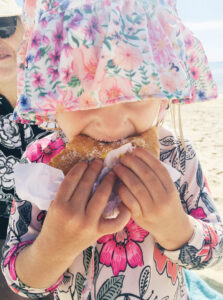 And in case you missed what was occurring with the sing-song shouts, the bolinhas man pumps the bulb on a horn straight from Harpo Marx.

My 2-year-old granddaughter and I are sold. We wave to the man.

Two baskets are strapped over his shoulders. He gestures to donut custard delights on one side or donut Nutella delights on the other. Bolinhas!

We buy both kinds.

My granddaughter heartily bites into a creme-filled donut the size of her head. Custard gushes out and smears her face. Who cares about a mess when the ocean is steps away? Mine tastes of the sand on my face and the ocean salt in my mouth and deliciousness.

What is going on? Donuts on the beach?

And like all wondrous thing, this donut has a twisting path. According to Etienne Roeder, writing for Deutchlandfunk Kultur (and translated by Google Translate), it all began in the 1930s when Jews were fleeing the Nazis and finding some kind of refuge in Portugal. A Jewish woman began baking and selling a popular Berlin donut as a way to survive without a work permit. This fried, hole-less donut was filled with jam. When the filling switched to an egg-based yellow cream (creme pasteleiro) to accommodate the Portuguese passion for custard, it became a hit.

I worked at a bakery in Iowa City when I was young, where we sold this same donut as bismarcks (a variation on the original German donut called a berliner). When left alone in the bakery at 3 a.m., I would deep-fat fry the bismarck dough, pump the inside with twice the usual amount of custard, and sit on a box eating a bit of paradise. 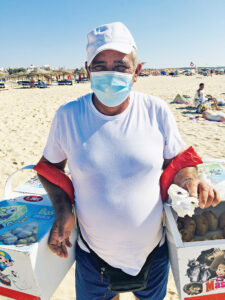 So each day we drive from our home in the hills to the white-sand beaches. We park and trek across the wooden boardwalks above cactus, scurrying crabs and long grasses. At the sand, we slip out of our shoes and begin to look for a spot among the hundreds of beach umbrellas. And it is then, if we listen closely, we hear a cry softly floating on the wind.

We strip off our towels, hats, sunglasses, sun shirts and race to get our first donut of the day.

Custard sticks to my face. My eyes are slightly glazed. And my belly is transforming into a bolinha.

Hmmm â¦ I wonder if we could race to the bolinhas man more quickly in a thong? ♦