The retirement of John Sarcone

This is not going to be an unbiased examination of John Sarconeâs tenure as Polk County Attorney â with an accompanying hard-hitting look at why he prefers Italian sausage sandwiches to beef burgers.

Nor is this going to be a tell-all about Sarconeâs staff and why some of them (they know who they are) felt the urge to eat more than their share of donuts on Friday donut days. Certainly a pertinent line of inquiry, but not today.

And donât think for a moment that this is going to be a serious discussion about charging decisions, or office administrative practices, or a review of important court cases in Polk County. Listen, Iâve been retired for 10 years, and I donât even know where the criminal courthouse is presently located. Is it by the Crusoe Umbrella? Grayâs Lake? Upstairs at Lucca? 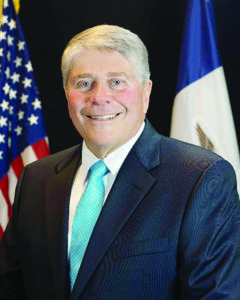 Rather, this is going to be about bosses. My boss, to be exact.

John Sarcone was my boss for two-thirds of my legal career.

He was a painfully straight-laced guy.

I was raised Catholic before I turned to the warmer climates of the fallen away. I knew folks just like Sarcone when I was growing up. Those older Catholic men who belonged to charitable organizations and the Knights of Columbus and were very much concerned about right and wrong, deeply loyal to family and friends, and extremely devout â¦ but also wanting to sin just a little, like eating cheesy pasta for lunch when theyâre supposed to be eating salads. Yup, wild and crazy guys. Thatâs Sarconeâs gang.

What you saw of Sarcone was exactly who he was. No hidden agendas. No double speak. No playing the angles. When I would disagree with him, it did not require guesswork as to his real position, which was as evident as the ashes on his forehead from Ash Wednesday services. And he did love the tussle over disagreements. Thank goodness he became a lawyer, and thank goodness he married a tough woman.

Look at Sarconeâs start. He was a defense lawyer in the public defendersâ office where he fought for those who had no voice. Trust me, he remembers every case and every individual because he talked about them on our noon-hour runs until I wanted to jump in the Des Moines River to escape all law-related discussions. And, also trust me, never once did I hear him speak ill of his clients â only opposing counsel. Yup, if a lawyer was on his bad list, they definitely earned a lump of coal from him at Christmas.

Sarcone then turned around and fought to protect the environment in Iowa, long before Greta Thunberg was even born. When I was teaching cops up and down the Missouri River, Sarcone had me drive out to the river to see evidence of his legal battles for the Iowa Attorney Generalâs Office, Environmental Division. He was proud of their success and should be.

And then Sarcone became my boss after politically defeating my old boss, Jim Smith. Oops. That left me sitting a little precariously on the tightrope of politics. But he kept me out of the purge. Why? Maybe he just wanted to put a lawyer in the dead-end, hallway cubicle that overlooked the fire escape. I did know how to open those windows in an emergency. As my mom says, make yourself useful.

So he gave me a job and 20 years disappeared under Sarcone.

And hereâs how I passed the time:

â¢ I investigated the death of a young man in a small neighboring town. Sarcone was urged to prosecute by the media and the public. After Shirley Ballard, my right-arm investigator, and I interviewed witnesses and examined all the evidence, we told Sarcone there was no case. He grilled me, thought about it, and refused to charge. He took a hit in the press. His response? It was the right thing to do.

â¢ I lost a high-profile murder case â front page news â because damning evidence was excluded. Sarcone searched me out, bought me a coffee, and told me I did the right thing. Then he reminded me to not take it personally and to get started on the next case. Of course, that was baloney. We all took it personally, including him. But I appreciated the sentiment.

â¢ He and I were door-knocking to get out the vote for one of his many races for County Attorney. Neighbor after neighbor complained about a recent case in the news â unbeknownst to them, my case. Their complaints were aggressive and negative. He heard it all. After we were done, he ignored the negativity, laughed at my discomfort, and asked me if I wanted to go get a ârealâ sausage sandwich at a joint he knew around the corner.

Did you know that the job of prosecutor, as defined by law, is to do justice? Not to charge people. Not to win cases. Not to be popular.

So you may or may not like John Sarcone. Thatâs all right. You may fault his charging decisions. Everyone has an opinion. You may think he stayed on too long or not long enough. Who doesnât suffer from that complaint?

Hereâs what I care about â I had a boss who always tried to do justice. Did he get it right every time? Of course not. Did he try? Yup.

That deserves an Italian sausage sandwich.

May John Sarcone enjoy his retirement. ♦