Beginnings are never a straight line 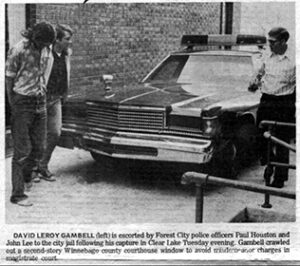 But there is always an âIn the beginningâ moment.

As the Good Book says, God woke up and decided to begin the first day by creating âthe heaven and the earth.â See, that was a good start. Sort of like when you were drifting along in an Instagram haze and suddenly decided to make that Angel Food Cake with lemon icing that someone posted. Excellent first effort.

But itâs never a straight line from here to there, is it?

Paul Houston was a young man with goals. His big ambition was to do music.

âPlayed the trombone in high school. I was mediocre. Went on to Northeast Missouri State to be a band director. My faculty advisor, who also taught Music Theory 101, called me in at the end of my first semester and said: âPaul, have you thought of a different career because I probably should give you an F but Iâm gonna give you a D-.â I thanked him for showing me the light.â

The deal was that Paul had little money. His dad had died when he was 15, and his mom didnât make enough as a school teacher.

âSo I signed up to be a campus cop and worked with the future chief of police in Forest City, Doug Book. After school, I was hired to be a cop in Forest City.â

Not quite the band director career Paul imagined.

âI was a rookie cop, wet behind the ears. Nothing teaches you more quickly than working the street, and sometimes it will teach you a harsh lesson.â

âIt was Halloween, and I was patrolling by Waldorf College and suddenly I had a whole bunch of eggs thrown on my car. Of course, being 21 years of age, Iâm out of the squad car door running after these guys.â

Did you catch them?

âWell, I was running through backyards when suddenly â kaboom!â

Life is tricky and rarely heroic.

âI was on patrol one evening, and I caught Dave Gambell taking a whiz on the side of the courthouse.â

Gambell was arrested for public intoxication and open container. While in custody, Gambell had other legal problems, and he ended up in the Winnebago County Courthouse for a bond hearing.

Gambellâs lawyer came in to meet with his client while Paul waited in the courtroom.

âThe young lawyer, who had just started his law practice, met Gambell in the little room off the courtroom on the second floor,â Paul says.

Before long it was time for Gambellâs hearing, and he was called to court.

A small problem. Gambell was no longer in the small room. The screen was out of the window, and Gambell had vanished.

âThe window was open. It was a panic. âRing the bells! The suspect has fled.â â Paul raises the cry nearly 50 years later.

Gambell was free just a short time before being arrested by the Clear Lake Police Department. And a young Paul Houston was photographed taking Gambell back to jail by the Forest City Summit newspaper.

Paul went on to be an Urbandale cop and then many years as an investigator and chief investigator for the Polk County Attorneyâs Office. Murders, sexual abuse, kidnappings, robbery, and corralling wayward prosecutors were his bailiwick. Quite the life.

But it all began with a dangerous clothesline and a poor guy taking a âwhiz.â

And the young lawyer whose client jumped out the window?

Beginnings are never a straight line. ♦