The arrival of goldfinches

The end of one time and the beginning of another. 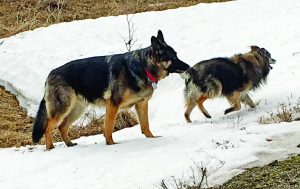 The goldfinches land on the feeder, quickly eat, then dart away. Dine and dash. They donât hang around with the other birds for small talk and local gossip. But they have been long forecasting the change from winter to summer, dark days to light, hot coffee to iced lattes.

The end of one time and the beginning of another.

Loaded with two shots in my arm, I sit outside at the coffee shop with my friend Bill. Unmasked, we slowly drink our coffee. Only a few folks out and about. Fifteen months since we sat at this outside table. Two old men together.

âI had to put one of our dogs down this week,â I tell Bill after a bit.

âOh no,â he says, wanting me to tell more. Talking to Bill is like talking to my therapist.

âJoe, tell me how that makes you feel,â Bill says, knowing that I have to consult a âfeelingsâ chart for a list of options. And even then I tentatively ask, âHappy? No, sad? How about melancholy?â

Bear was a rescue puppy. Yup, a rescue from some young neighbors. We found him left alone for hours and sometimes days in a small enclosed porch with little water or food and an unsurprising stench. My wife and kids would repeatedly rescue him and bring him to live for a short time at our house. Make no mistake, I was not a fan of bringing another dog into our family â even out of compassion. We already had three cats, two dogs and a goldfish. Oh yeah, and three kids. I was compassioned out.

But my wife, out of town when I saw the ownerâs âfor saleâ sign go up, ordered me to permanently rescue the puppy. Dutifully, I knocked on the door and told the owner he knew he could not take care of the dog and that we were taking the puppy to our house for good. He sheepishly agreed and gave me the dog. Within 24 hours, he was chipped and tagged and ours.

Now we had Bear, some kind of 45-pound shepherd mix. A herding dog. So he herded the 130-pound yellow lab around the house and yard. And they frolicked and played, and Bear kept the labâs ears clean. Quite the pack.

In the country, the two dogs hunted as a team. Bear, quick and darting, rousted the prey. And the lab came in to close the deal. Generally all I would find is a few tufts of fur to mark their success. Of course, theyâd both be sick for a day and sometimes smelled of skunk for much longer.

Years ticked away. The big lab died of old age, and the cats did, too, and Goldy the goldfish expired one morning, cause unknown.

And Bear lived on. He cleaned the ears of the new German Shepherd and tried to herd the new cat. Life was still sweet.

But Bear grew older and older. Sight, hearing, hips, all left for a warmer climate. And dementia set in. It was time.

âI called the vet, and he came out to the house yesterday.â I pause to clear my throat before continuing my story with Bill.

We buried him with the other animals that have come and gone through our life. But weâd saved the ashes from his old friend, the yellow lab, who was too big to bury. Together they went into the ground.

âSo, what do you think?â says Bill.

Bill says nothing for a moment.

âIâm planning to live at least until 90,â Bill says.

We look at the bright yellow goldfinches and order another coffee. ♦