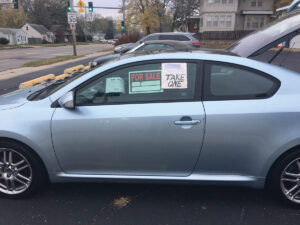 The boxwood stump, buried by leaves, snagged my dragging foot and landed me face-first in the soft ground. Ker-plop. No fanfare. No discussion. And certainly no dissent on the part of my lightning quick reflexes. Justâ¦ bang.

So here I am in the leaves. Observing the world from a new perspective, low to the ground.

When I was young and fell down, I laughed, picked myself up, and hurried on to the next fun event. Now when I fall, I find myself going through a check list: right arm â not broken; left wrist â bruised; head â shaken but still on. You get the idea.

Iâm in no rush to get up today. I turn over on my back and look at the blue Iowa sky.

Perhaps I need a makeover? Something that shouts out I am still alive? What about a new hot car?

âSeveral studies have shown that appearance is the most significant factor when making a first impression. The vehicle one drives contributes as much to appearance as attire or hairstyle. A car is more than just a mode of transportation for some; it is an extension of the driverâs image.â Jeffrey Harper, writing for Hotcars.

But cars have never been my friend. No matter how shiny and bright, they have been fickle companions at best. Sometimes reliable, usually not. And cars go out of their way to hurt me. I have the distinction of being hit by cars while on my bike in three different states and over three different decades of my life. Cars must communicate with each other when I cross the state line â âThereâs Joe. Run him over.â

Letâs take a brief tour of cars Iâve owned. There was the Toyota Corolla with three million miles on it. The roof was caved in. The front passenger door didnât properly close. And the gas gauge was unreliable. Oh, yeah, and the gas tank leaked. It was a gem of a car. I still recall running out of gas on the 42nd Street bridge over I-235. Three kids in the back seat. A gas station in the distance. And, unbeknownst to me, my wife driving past on I-235 wondering what that pitiful guy was doing up on the overpass with three kids hanging out the back windows. Once the harsh reality hit home â HER husband and HER kids â it turned into one of those moments where the marriage could have gone either way.

Or the old Ford Taurus my wife was driving in West Des Moines when the engine collapsed onto the front axle. No kidding. The engine just let loose. The tires were turned at the time, so she could still move the car. But only in a circle.

Then there was the Toyota van that had no heating on the front passenger side, resulting in a small ice rink beneath the passengerâs frozen feet on blustery winter days. A feature you canât find much these daysâ¦ a passenger seat that doubles as a meat locker.

Love affair with cars? I donât think so.

But yesterday, I had a car to sell. My daughterâs. A sporty little Toyota Scion with a spoiler, moon roof and quick acceleration. I know these car facts because my daughter is living overseas, and Iâm in charge of the sale and had to drive the car to get it out of storage.

As you have probably gathered, my stable of cars has leaned toward bulky, hard to handle, and license plates that say âLOSR#1.â

I touched my daughterâs gas pedal and found myself a block down the road. Like that. ZIP. I turned a corner. BAM. It hugged the road so tight, the breath whooshed out of my lungs, and I shouted, âYippee!â I donât think Iâve ever shouted âyippeeâ in my life. No one with half a brain shouts yippee.

âYippee!â I shouted again as I rounded another corner.

Why didnât anyone tell me?

So I said to my wife: âLook, this is the real me. Fast and loose and wild.â

I persisted, âSure, itâs an old man cliche, but I was born to drive a sport car.â

My wife took a breath.

She patiently explained to me that I didnât fit in my daughterâs car. My body was too long for that little space. Even with my head 2 inches into the moonroof, there was still a couple of inches that had nowhere to go. I was driving almost laying down on my back, barely able to see out the front.

But that is how love affairs die.

Today my sports car is sold. I am driving a large, bulky car with license plates that say âLOSR#1.â

Makeover of Joe? Not so much.

And now here I am, looking at the fallen leaves, low to the ground, wondering how to get up.

Hmmmmâ¦ maybe I should get a tattoo? ♦