If we build it, the bikers will come

There are more bikes than residents in the Netherlands. 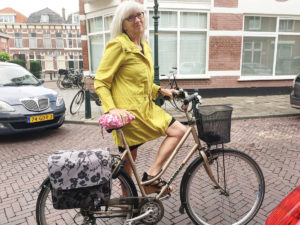 Being on a bike has nearly killed me five times. No kidding. My favorite? Riding down a hill in Dubuque on a homemade bicycle built for three, flipping off the back and landing on the top of a fire hydrant. On my head. The fire hydrant walked away unscathed. Me? Not so much.

And then, of course, thereâs the one where I was hit in the throat by a van in Urbandale (figure that one out), was paralyzed for a while, and ended up with a new, sexier voice. That certainly had a few twists I donât want to repeat too often.

But here I am in the Netherlands at the ripe old age of 64 on a 1,000-pound Dutch bike with coaster brakes. 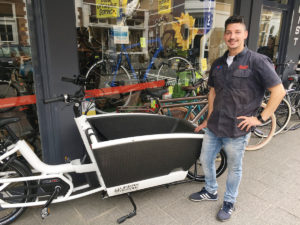 How is that possible?

For example, hereâs my wife going to work at a UN war crimes tribunal in The Hague. Dressed for work and wearing platform shoes. And it is about to rain. Go figure.

Is she wearing biking shorts? No! Is she going to stay home because itâs going to rain? No! Will everyone show up at work with wet hair and wind-tossed clothes? Of course. But you just wear your suit and you wear your dress and you wear your work clothes and you carry your cello and you toss in your briefcase and you hold your surfboard tight. This is not complicated.

Michel Vissers has worked for more than a decade at a bike shop in Scheveningen. Like most Dutch, he uses his bike more than his car. 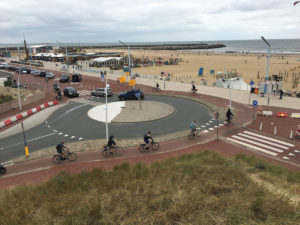 âIt is easier to get where you want to go by bike. It is more friendly. All Netherlands is bike friendly. You have to have a bike in the Netherlands or else you are immobile.â

When do kids start riding bikes?

âWith pedals? Three plus. I stopped using my training wheels at four. And people ride bikes until they are physically unable. â

What about those bikes that look like they have the prow of a boat on the front?

âAh, I have the Urban Arrow. It is a monster. When you have two kids and third on its way, you buy this instead of a car. You donât want a car.â

OK, how did this happen in the Netherlands?

Depending on the history you read, most say that the Dutch were enamored with the bicycle as early as the late 1800s. The restrictions of the World Wars merely made this attachment stronger. But when the last post-war boom hit, there was a push away from bikes to cars. Unfortunately, as Dutch cities became more and more congested, the number of accidents went through the roof. According to the BBC, 3,000 people died in car accidents in 1971 in the Netherlands, and 450 of them were children. 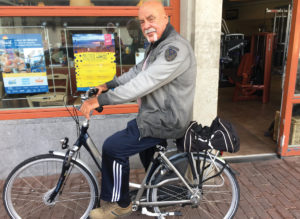 People were in an uproar. Protests sprang up. One group was even called âStop de Kindermoordâ (Stop the Child Murder). On top of all this, the oil crisis hit in 1973. The Dutch government had enough. They invested in bicycle infrastructure and moved away from planning cities around cars. The bike became a center-stage performer. And Dutch culture went along for the ride.

What did this mean in reality? Check out this roundabout with a designated bike lane not far from our apartment.
As a result of all the protected bikeways and the omnipresent bike signs and stand-alone bike stoplights and legal liability in favor of the biker, 70 percent of all journeys in Amsterdam and The Hague are made by bike. And, of course, there are more bikes than residents in the Netherlands. Everyone bikes.

Jaap Bal is retired after years of work as a sailor and then an investigator at a laboratory.

His arms are as big as my waist. His heart is a young manâs. And he smiles with a gracious ease.

âI will bike until I am not able.â

Iâm not holding my breath for that to occur.

W.P. Kinsella, of âField of Dreamsâ fame, coined the phrase, âIf you build it, he will come.â

All we have to do is build itâ¦ and the bikers will come. ♦