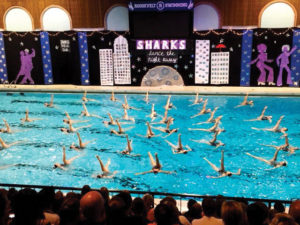 FINA artistic swimming rules. A Ballet Leg is assumed. Maintaining this position, the body is rotated backwards around a lateral axis through the hips to assume a Fishtail Position. The horizontal leg is lifted to a Vertical Position. A Vertical Descent is executed.

I donât understand a word FINA is saying. âVertical Descent?â âFishtail Position?â And, of course, even with all their minute specifications, FINA left out a small detail. THIS IS ALL DONE IN WATER! Please.

âItâs called the Drain. The first girl who goes under basically has to hold her breath for a very long time.â

Brad Dotson, a fellow spectator at the Roosevelt Sharks Dance The Night Away, and father of one of the Sharks, gives me a wry smile as he adds:

Of course it doesnât always work. Duh. They are in a perpetual state of drowning. Please get real. This is insane.
And there it is. Circle upon circle upon circle of Roosevelt High School girls with legs extended, somehow treading water, begin to collapse in the middle. And, like the name says, their bodies seem to magically all rush toward the center where they are sucked down in a splash. The Drain in action. A grand success!

The crowd erupts. They did it! The alumni women in the front lean over the railing cheering and shouting and pumping their fists in the air. Parents and students scream with delight over the loud music. And the girls? To my surprise and relief, they resurface, smile widely, and move onto the next routine.

You might know the Sharksâ performance as water ballet. Although synchronized swimming seems to be the common term. And now the 2017 governing body of FINA calls it artistic swimming.

I call it a miracle no one drowned. 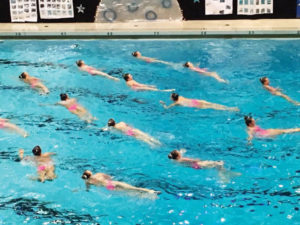 FINA artistic swimming rules. From a Back Layout Position the knees are drawn toward the chest, with toes at the surface to assume a Tub Position. The knees are straightened to assume a Surface Ballet Leg Double Position.
Listen, I canât swim. Sorry. Three thousand lessons. Wonderful instructors. Pressure from my very buoyant children and wife to become an adult swimmer. It doesnât matter. I just have a certain affinity for the bottom of a pool. I jump in, sink to the bottom, and feel right at home.

But not these girls.

According to the brochure, the Roosevelt Sharks are âthe oldest high school synchronized swimming club in the nation.â Founded in 1926, they are swimming toward their first 100 years. Amazing.

Olivia Dotson, a junior at Roosevelt High School, survives the performance and meets up with me at a coffee shop.

âOK, if your hands are in the air, and youâre not moving and youâre in deep water, why doesnât anyone call 911?â

âSo, when your arms are in the air, thereâs this thing called the Eggbeater. Itâs kind of like treading water 2.0. You have to get this circular movement with your legs down very precisely. Our team is made up of a lot of swimmers, and we do a lot of practicing. After you go over it again and again and again, you get it.â

Iâm not fooled. I suspect 10 girls go into the pool to practice the Eggbeater and only five walk out. 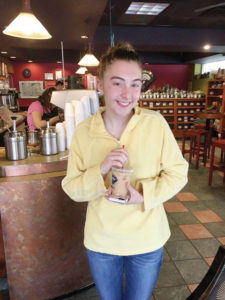 âWhen we come in as freshmen, we get a Big Sis. The Big Sis are the seniors. That bond is formed. And once they graduate, they have someone to come back and watch. You know, there are graduates from three years out watching. And part of it is they know how hard it is. And they know how much work goes into it. And they just go crazy. At intermission, they even come in with flowers.â

It turns out that Olivia and three other performers choreographed a portion of the program. A dozen other young women choreographed other portions. Then there is the music and the design and all the incidentals of a top-notch spectacle. All done by these girls. Oh, yeah, and they perform more than 240 hours of community service on top of all this.

So, Olivia, is this competitive?

âFor the Sharks, the end game is just to perform it. Youâre not doing it to compete with anyone else. It is a performance. It is creative. You channel it. Youâre trying to work with the person next to you, not beat them.â

Is that because the person next to you is drowning?

âBeing part of the Sharks is so worth it. Itâs a real special thing.â

Joy-filled, laughing, she leaves to go pick up trash as part of another school project.

As for me, I do a Vertical Descent with a Ballet Leg into a stuffed chair with my latte tipped into a Vertical Position ready for the big Drain. Trust me, no one ever drowns in a coffee shop. ♦