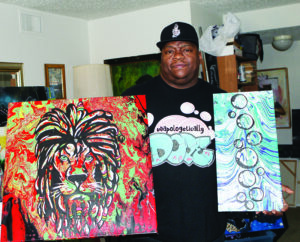 When Iven Jones sold one of his paintings of Tupac Shakur, he felt inspired to continue with his work. That one push affirmed his love of painting, and he hasnât looked back.

After a long-time employer fired Jones, he focused on his painting career.

âI took a leap of faith and put everything I had into my art,â he remembers. âAfter that job â I put a lot of time into the place â I decided, if Iâm going to work, I want to do something for me instead of making someone else rich.â

Jones grew up in an all-Black community in Chicago. As he got older, he realized that some Blacks lacked self-love. One of his favorite art pieces reflects the meaning of self love, which starts as a child. The painting shows a young Black girl with a Black doll. 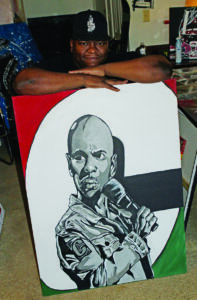 Painting urban/pop culture art has proven to be a strength for Jones.

âIt starts when youâre young,â he says. âYou have to have images that look like you â thatâs the type of love she wants for herself.â

Itâs challenging for Jones to believe in his own artistic talents and gifts, but the difficult times pushed him to do better.

âIn my experience at art shows, sometimes Iâm the only Black person there,â he says. âI wasnât selling anything and sat in my tent. It was discouraging at one point. After a while, I realized that experience pushed me. I wanted to paint even more.â

Jones sells a number of prints, saying the past year was one of his best yet. He did a live painting at Jasper Winery for an art auction. His mom from Chicago was there to witness him in his element.

âA man came over, saying how the painting spoke to him,â he remembers. âI thought it was the greatest, especially because my mom was there to see it.â

Eventually, heâd like art to be a full-time job, but it doesnât pay all the bills yet.

He had an art showing at the Barnum Factory, where he painted an art mural. The owner helped him with art shows, giving encouragement. 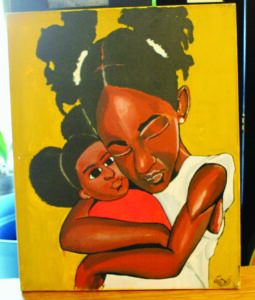 Jonesâ favorite art piece, of a young Black girl with a doll, reflects his definition of self love, which starts as a child.

âShe told me to own it and helped me figure things out on my own,â he says, grateful for the boost.

He says that painting changed his life.

âI first thought of it as a stress reliever. It kept my head on right,â he says. âPeople kept telling me I need to do something with my art.â

Jones paints every night when he gets home from work. When he finishes a painting, a sense of accomplishment washes over him.

âIâll always be me â trying to be the best I can,â he says. âEvery painting gets better. Itâs a confidence builder and reinforces my passion for art.â ♦