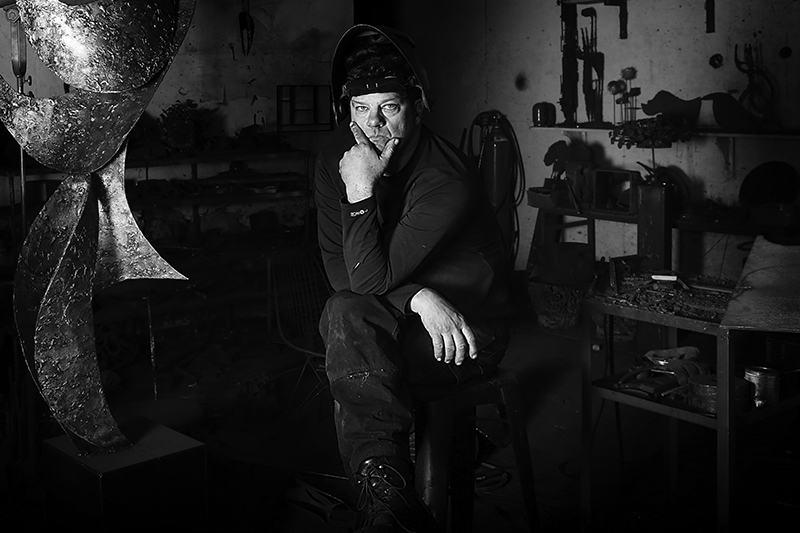 Known for having a âbrutalist style,â James Beardenâs welded steel sculptures have become hot items on the art market.

An urchin made of steel and a cathedral fireplace screen found homes to New York art collectors. Another art enthusiast is dedicating space for nine of James Beardenâs sculptures in a 15,000-foot home, based on interpretation of what the COVID pandemic meant to him.

Bearden, an artist located in Des Moines, is quickly becoming known for his unique recognizable art metal works around the globe.

His greatest achievement is being awarded a âListed Artistâ in 2014. Similar to a âblue bookâ of art, this lists only artists whose value most likely increases. Bearden says, âPicasso is in there. If you search for âin the style of James Beardenâ you know itâs an investment.â 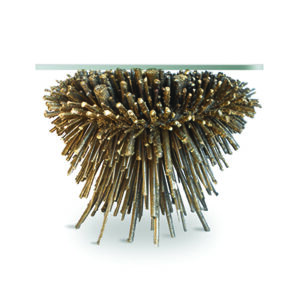 Bearden grew up in Bondurant, graduated from Grand View University and worked as a graphic designer and art director for 25 years. After leaving the profession and âlosing most everything,â he taught himself how to weld in 2007.

He welds or âmeldsâ steel into various unique sculptures, considered a brutalist style, with rough edges, charred surfaces and unusual shapes. He builds up steel and tears it down until the pieces come together perfectly. Creating beautiful art is tough work. Before he moved into his studio at Mainframe Studios, he worked in his garage or driveway, where neighbors scoffed at the smoky, noisy work.

âItâs heavy, dirty, hot, smoky work,â he explains. âIâm working in the dark, under a helmet.â

One of his first big breaks was in 2015, when he held a show in Manhattan, New York. At the show, Larry Weinberg, art curator and gallery owner at Weinberg Modern in New York, connected Bearden to a long line of art connoisseurs. He commissioned high-end art consignments and sells his artwork through Studio Van Den Akker in D& D Fine Art Services in New York. 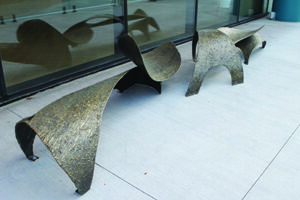 The unique bench on display in front of Mainframe Studios is a creation of James Bearden.

A one-man show in January 2020 at the Gallery at 200 Lex at the New York Design Center was a successâ¦ until the pandemic hit.

âThere were hundreds at the opening,â he remembers. âIt was bustling with excitement. Then we came home (when the pandemic shut things down). None of the work was viewed. It destroyed my show.â

A listing of one of his sculptures came up on a Wright Auction House in Chicago.

âIt went for five times higher than the original piece sold for. Usually that only happens with dead artists,â he says. âThat was cool. Auctions are not my favorite way to sell, as they are a roll of the dice.â

Another kudos was earned through the Antiques Roadshow, where Beardenâs work was discovered by David Rago. Bearden was brought in to create furniture with designers, and his work is featured on Rago Auctions. His Urchin collection is popular on 1st Dibs.

When his artwork turns up in the right hands, Bearden feels contentment.

âItâs getting to the heart of a person,â he says. âI know that piece is going to survive in a good home. It will survive past when Iâm gone.â ♦