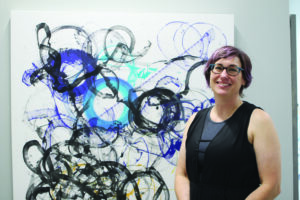 When visiting artist Amenda Tate in her studio at Mainframe Studio, I met her co-artist, Manibus. Manibus is an integral part of Tateâs unique artistry. However, Manibus was silent for the interview â which is normal. Thatâs because Manibus is a robot.

To describe Tateâs artwork is complex and unique. One day, as she was experimenting with home electronics with her kids, she was using a robot theyâd created together. A cellphone sensor/controller was tracking movements, which translated into motion by the robot. As she examined further, she pondered how to get the movements on paper.

She heard of applications for the Des Moines Ballet for an artist-in-residence. She thought, âWhat if I attach the control device on a dancer, capturing the dancerâs movements on paper?â 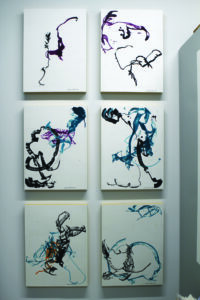 Paintings are from dancers at the Colorado Ballet. Dancers say they feel personally invested and an active part of her creation. Photo by Jackie Wilson

She jerry-rigged the robot with an arm equipped to hold paint. The robot, with two motors, senses movements via cell phone control, worn on the dancerâs wrist. As the dancer moves, Tate picks up the robot to put on different paint brush strokes, changing colors and positioning on the paper.

The robot reacts to the dancerâs movements.

âI pick it up and change colors,â she says. âItâs not too different from an artist using a paintbrush. It uses tech elements, and it doesnât happen without human input.â

The result is a swirl of movement and colors on paper. Each painting tells a story of what the dancer was feeling, with Tate as a mediator.

âMy role is the facilitator, to capture the mood and emotion of whatâs happening with the dance,â she explains.

Paintings are reactionary, but she has greater control if sheâs rehearsed choreography with the dancer.

âItâs all in the moment, subject to elements of chance. What happens is a leap of faith,â she says.

She frames the completed artwork or cuts out the painted portions, arranging them on a painted background. Sheâs demonstrated her work with Manibus at the Science Center of Iowa, Iowa Arts Council, Ballet Des Moines, New York Hall of Science, TEDx Des Moines and more. She recently produced a short film celebrating the 100th anniversary of the robot. 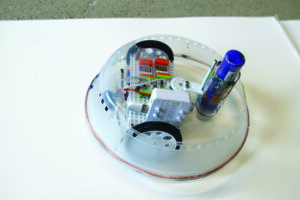 The robot Manibus was named after the Latin word for hand. Tate added a plastic splatter guard, which keeps the robot from damaging itself when it bumps into the frame. Photo by Jackie Wilson

As Tate is also a metalsmith and jewelry maker, she says, âI can only make so many earrings. This type of art has the capacity to build meaning. It can transform mundane moments and interaction that creates meaning. What if the data, from the robot, is more open to be interpreted in an emotional way?â

Those are the questions asked by Tate, as sheâs trying to change how people think about her art. âI enjoy creating space for someone else. I want to open the door outside the norm and help put on paper how people feel,â she says. 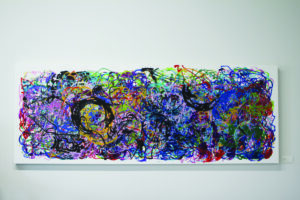 Dozens of people from the Science Center wore the controller device to create this painting. Photo by Jackie Wilson