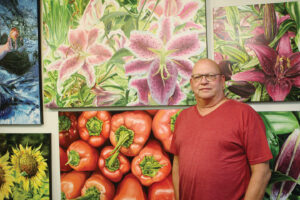 What does a red glazed vase, a motorcycle, a semi-nude woman and a basket of apples all have in common?

These are a handful of the diverse artworks artist Bob Kling has created or painted over the past four decades of his career.

Kling, based in Indianola, is not only a painter, he is also a potter. He acquired and perfected the skills when he taught high school art for 33 years.

âIn a small school, you learn everything,â he says. âItâs unusual for an artist to be both a painter and a potter.â

He knew as a young boy his talent for painting and drawing would lead him to his career as an artist. His uncle, a sign writer, gave him art advice.

Kling paints a variety of subjects, often creating a series of like objects. When he couldnât travel last year due to COVID, he took out photos of his previous yearâs garden and painted 23 large florals. He went to Hy-Vee and purchased produce, painting apples and peppers. Some paintings are so realistic, they appear to be photographs. 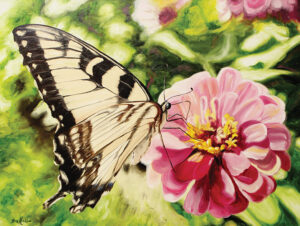 Ideally, heâd like people to realize two truths after theyâve viewed his work.

âNumber one, I really love doing it,â he says. âNumber two, Iâm really good at it. I tell kids itâs not bragging if itâs the truth.â

Kling shows his art at exhibits across the U.S. He attends art festivals with both pottery and paintings on hand and enjoys conversing with the patrons.

âWhen I make pottery, itâs to sell,â he says. âI donât always paint to sell. I paint what I want. Usually thereâs someone into one of the subjects Iâve painted, such as classic cars or figure painting.â

He recently moved into a new home with a new studio â a former garage transformed into a mini-gallery. With a large garden space, he has ample subjects to paint right in his back yard. In June, he hosted a studio and garden tour at his new digs. Heâs displaying his art in the Waukee Arts Festival July 16-17. 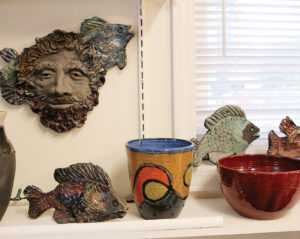 âItâs fun to do local festivals. As the Waukee Festival draws from the Des Moines metro, thereâs a lot of quality artists, and Iâm happy to show alongside other quality works,â he says.

The mechanics of running a business is a challenge, along with maintaining self-discipline. Itâs easier now as heâs only teaching one art class at Simpson College.

âItâs easy to come up with excuses not to work,â he explains. âMost artists have some rigamarole to put off work. Itâs easy to get back in. I always have something to work on.â

Kling has also written a book titled, âHow to Glue Your Face To The Carpet.â It is for art teachers who give out sketch book assignments.

The most common advice he gives to budding student artists?

With countless paintings to his name, itâs difficult to pick his favorite masterpiece. But after taking a minute to ponder, he comes up with the right answer.

âIâm hoping the next one will be my favorite,â he says. ♦