The magic, according to artist Cameron Sadeghpour, comes with the steel that is manipulated. 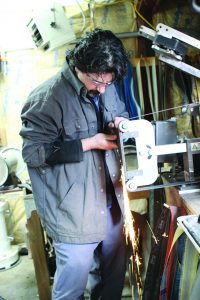 When you think of a knife, what image comes to mind? A tool to prepare food? A sharp object to cut fishing lines? A piece of artwork?

Cameron Sadeghpour says his knives are not only art but also a functional, all-around tool and a collectorâs item â something to be used for generations.

The local bladesmith creates his custom knives â including the blade, handle and sheath â to sell as art at Lost Planet Forge at Mainframe Studios in Des Moines.

Sadeghpour has made knives since he was a young boy, and his mom still has the first knife he created. He began selling knives eight years ago, saying itâs an obsession.

âThe first 100 knives were ugly,â he says. âNow that people see and want the knives, I can rationalize making them.â

As a bladesmith, the first process is to forge the metal. He heats metal to glowing red, beating it with a hammer. The forge marks are left on the surface of the knife, giving it a unique look by showing the rough surface and how it was forged.

Once heâs forged the blade, he continues shaping, heating and grinding. Heâll use a sandpaper belt on the grinder.

âThe bladesmithing is all about the structure of the steel,â Sadeghpour explains. âThe magic comes with the steel that is manipulated.â

The hardening and tempering process makes it tough. Once the blade is ready, heâll assemble the handle materials by gluing or soldering. Handles are crafted from local Iowa materials, including a walnut tree from Beaverdale and a thousand-year-old Iowa bog oak. Some handles have whitetail deer antler or sheep horn in the collar of the handle. The sheath is crafted from handmade leather. 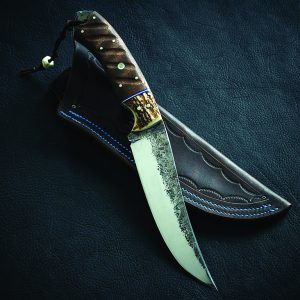 A well-made knife can be a keepsake passed down for generations. Photos by Cameron Sadeghpour

Most of his knives are used by outdoor enthusiasts, including hikers, campers, backpackers and fishermen. As an avid outdoorsman, his favorite use is mushrooming.

âItâs a happy conduit to the outdoors,â he says. âItâs something useful and beautiful, which flies in the face of all of our throwaway stuff.â

One challenge he faces is that some people view knives as weapons, and heâs unable to advertise on certain media formats. Instead, he relies on word of mouth. He thinks everyone should have a special knife for practical, indefinite use.

âItâs not meant to freak anyone out or threaten people with,â he explains. âThink of mom making a meal in the kitchen with a knife,â he says. âIf you become familiar with the knife, then itâs not a threat.â

A sturdy knife will last a lifetime and come in handy.

âThereâs some romance in making these knives. They arenât just an Amazon purchase. People buy a special knife and use it forever. Mom can use it as a picnic knife,â he says. âAbraham Lincoln died with a knife in his pocket.â

Cameron says knives are âmore than a black piece of plasticâ and can be handed down for generations.

âI encourage people to take a fresh look at what they purchase. Knives are minimally processed â a natural piece of art,â he says. ♦