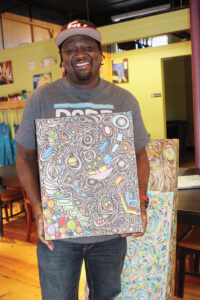 Miradieu Joseph is living the
American dream and making
art. Joseph took airbrush art
classes from local artist Shawn
Palek. After he viewed some
of Palekâs artwork, he told
himself, âI can do thatâ and
he became inspired to create
and sell art. Josephâs artwork
can be found on Instagram at
haitianboatman.

While Miradieu Joseph sat in a work meeting, he doodled on Starbucks coffee cups to pass the time, giving him a five minute âmentalâ break. The elaborate doodles attracted the attention of his coworkers, and he purchased four blank cups from Wal-Mart, painted them and sold them within an hour.

He kept painting and selling to âkeep the monster fed,â thus fueling his art career.

Encouraged by his coworkers and his employer, Nationwide in Des Moines, the company held a Black History Month celebration where Joseph was featured as a live artist painting a mural.

Since then, heâs sold numerous colorful paintings â on canvases and cups â and he is now focused on his artwork. His immigrant parents inspired him to âlive the American dream.â

Joseph emigrated to the U.S. from Haiti at age 5, ending up in Florida. Both his parents worked, and as a latchkey kid, he had time to admire the brightly painted murals in his neighborhood. In addition, he says, âWe didnât have a lot of money, so Iâd spruce up clothes with patches to find a way to stand out.â

He did stand out â by running track and playing football.

He moved to Iowa in 1997, attending Wartburg College. There, he was a seven-time All American athlete, a national 400-meter hurdles champ, held 14 school records and was named to Wartburgâs athletic hall of fame.

His mom is proud of his accomplishments, but she doesnât understand abstract art.

âItâs hard for her to fathom why someone buys art,â he says. âCulturally it doesnât relate. Itâs not a photo realism picture of Jesus or (I canât be) pigeon-holed as a Black artist. What makes it Black art is because Iâm a Black artist.â

He excitedly sold his first painting for $35. He knows not everyone can afford original art, saying, âI donât want to give it away. Iâve learned over the years, itâs my self worth as an artist to say no. Iâve put my heart and soul into it. If I donât sell it, I know someone will eventually want it.â

The process of creating art begins when Joseph needs to purge thoughts from his head.

âI use it as a coping mechanism to de-stress,â he says. âThe art process doesnât start until the anxiety is high and I need to think. My art has saved my life.â

In addition to being an artist, Joseph is a menâs and womenâs assistant track and field coach at Grand View University. His athletes often request artwork, and heâll oblige for motivation.

âI told one athlete that if she made the finals, Iâd paint her spikes,â he says.

He jokes with friends that they better buy his artwork now while they can still afford it.

âI want people to look at a painting and say, âThatâs a Miradieu,â â he says. ♦