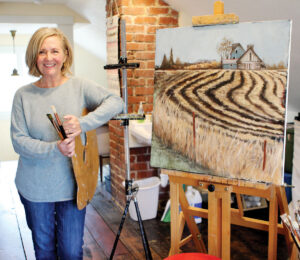 Learning that it is OK to make mistakes helped change Jill Woodward into the artist she is today.

As Jill Woodward has worked to perfect her art during the past three decades, sheâs arrived at one important realization: Itâs OK to make
mistakes. Even if a painting of hers looks âwrongâ or the mood appears off, itâs fixable and she embraces the mess.

âAn art teacher once told me to think of mistakes as a gift,â she says. âI used to think, âItâs ruined.â But now I can see whatâs wrong and fix it. It changed the whole process for me and made my painting better.â

Woodward is a fine art painter and paints in a sunny, remodeled attic studio in her renovated 1912 home in Dallas Center. She grew up in Stuart and lived elsewhere in the Midwest until settling back in Iowa four years ago.

She attended college to be an art teacher, but, instead, a degree in psychology and working as a therapist seemed like a better fit. She
recommitted as a full-time artist 20 years ago.

âChildren present themselves authentically,â she says. âThey donât have a strong image of themselves, unlike adults who often criticize their features. Instead itâs easy to observe them being themselves.â

She paints commissioned portraits, either live or from a photograph.

âI like painting people who are unaware of being viewed or looking away,â she says.

When visiting Peru, she completed a Latin American series, which helps keep her ideas flowing. Sheâs inspired by real stories of immigrants crossing the borders.

Her painting inspired by the book, âHeartbeat of Wounded Knee,â depicts Native Americans massacred at Wounded Knee. Family members helped to set the scene for her.

Sheâs displayed art in local coffee shops, Heritage Gallery and La Poste in Perry. As numerous arts shows were canceled due to COVID, she misses the interaction with potential art buyers.

âWhen something sells, youâre there to talk to the person,â she says. âIt feels really good as to why they want to buy it. They wouldnât spend money if they didnât have an emotional connection to it.â

Sheâs exchanged or bartered art from other artists and believes original art contains âpaint strokes all their own.â

âThe energy of having original art in the home is so valuable,â she says. âYou can look at it for years and, because of the details, keep discovering new things.â

Curious individuals ask how long it takes for her to paint.

âI never have any idea,â she admits. âI lose track of time â thereâs so much pleasure in the process.â

When she approaches a blank canvas, itâs an emotional undertaking.

âItâs fun to experiment. Iâm so thrilled to see where this is going,â she says. âAside from being a parent, being an artist is my favorite role in life.â ♦